Prior to proceeding to the business end of the review, we look at a couple of different aspects that affect the end-user experience - power consumption and thermals. We recorded power consumption and power factor values using the Ubiquiti Networks mPower Pro power strip at various brightness levels. The good news is that the White 800 consumes very little power (~ 700 mW) in the standby mode after recent firmware updates. It was close to 2W at launch, but it is too low to measure reliably on the AC side now. (Update: We shifted the power measurement duties to the Visible Energy UFO Power Center. It can measure sub-1 W numbers more reliably compared to the Ubiquiti Networks mPower devices. The table below has been updated for the standby setting.)

There was no measurable variation in the power numbers when the color temperature was tuned (for a particular brightness level).

In order to evaluate the thermal performance, we kept the light on at the maximum brightness level for a hour and recorded a thermal image (using the Seek Thermal smartphone add-on). As recommended for any 'high-power' LED fixture, it would be good to not install the unit in a tight space with inadequate airflow. (Update: It has been brought to my notice that the LIFX bulbs have been "UL box" tested (that's a standard ~6" wooden cube, open on one end - simulating an air starved ceiling fitting), and should meet their stated lifetimes in an open air fitting. Everything in the bulb is rated for 105 C operation) 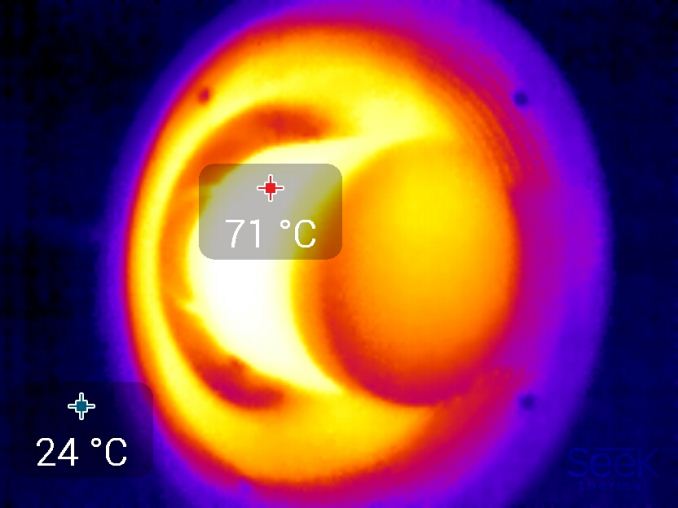 The following table summarizes the various home automation aspects / consumer checklist for the LIFX White 800 and how it compares with the other systems that we have evaluated before.

With respect to the open APIs, we would like the LIFX bulbs to present a simpler interface for power users. HTTP APIs and a web server (that could also act as an interface on PCs) similar to that of the UFO Power Center or the Ubiquiti Networks mFi devices would be great. In terms of hardware, we observed audible buzzing with any brightness setting under 100%. This might not be a problem for ceiling fixtures, but is definitely a factor when the bulb is within earshot for those sensitive to such noise. Unfortunately, this is a problem with most dimmable LED fixtures.

Other than the above two aspects, the LIFX White 800 is a reasonably-priced smart lighting fixture. The tunable color temperature differentiates it from the host of multi-colored smart LED bulbs in the market. The low-power Qualcomm Atheros QCA4002 platform is also instrumental in driving down the power consumption and price for widespread adoption.