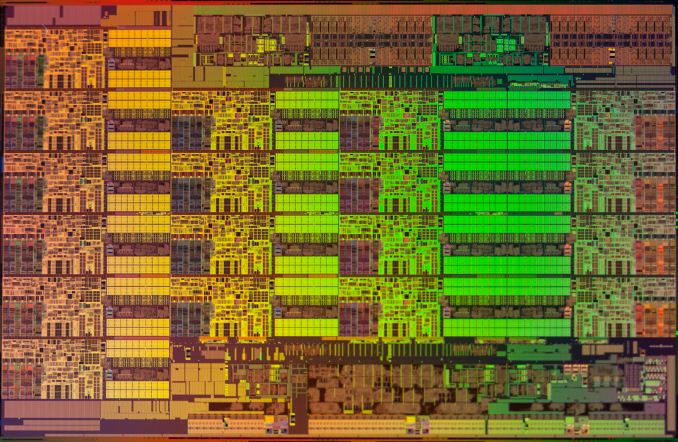 The story behind the high-end Xeon E7 has been an uninterrupted triumphal march for the past 5 years: Intel's most expensive Xeon beats Oracle servers - which cost a magnitude more -  silly, and offers much better performance per watt/dollar than the massive IBM POWER servers.  Each time a new generation of quad/octal socket Xeons is born, Intel increases the core count, RAS features, and performance per core while charging more for the top SKUs. Each time that price increases is justified, as the total cost of a similar RISC server is a factor more than an Xeon E7 server. From the Intel side, this new generation based upon the Haswell core is no different: more cores (18 vs 15), better RAS, slightly more performance per core and ... higher prices.

However, before you close this tab of your browser, know that even this high-end market is getting (more) exciting. Yes, Intel is correct in that the market momentum is still very much in favor of themselves and thus x86. 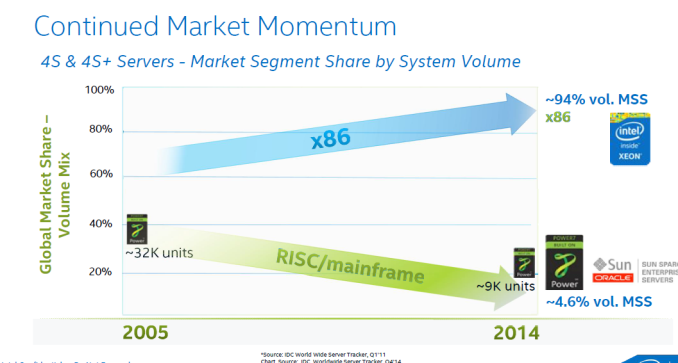 No less than 98% of the server shipments have been "Intel inside". No less than 92-94% of the four socket and higher servers contain Intel Xeons.  From the revenue side, the RISC based systems are still good for slightly less than 20% of the $49 Billion (per year) server market*.  Oracle still commands about 4% (+/- $2 Billion), but has been in a steady decline. IBM's POWER based servers are good for about 12-15% (including mainframes) or $6-7 Billion depending on who you ask (*).

It is however not game over (yet?) for IBM. The big news of the past months is that IBM has sold its x86 server division to Lenovo. As a result, Big Blue finally throw its enormous weight behind the homegrown POWER chips. Instead of a confusing and half heartly "we will sell you x86 and Itanium too" message, we now get the "time to switch over to OpenPOWER" message. IBM spent $1 billion to encourage ISVs to port x86-linux applications to the Power Linux platform.  IBM also opened up its hardware: since late 2013, the OpenPower Foundation has been growing quickly with Wistron (ODM), Tyan and Google building hardware on top of the Power chips. The OpenPOWER Foundation now has 113 members, and lots of OpenPower servers are being designed and build. Timothy Green of the Motley fool believes OpenPower will threaten Intel's server hegemony in the largest server market, China.

But enough of that. This is Anandtech, and here we quantify claims instead of just rambling about changing markets. What has Intel cooked up and how does it stack up to the competion? Let's find out.