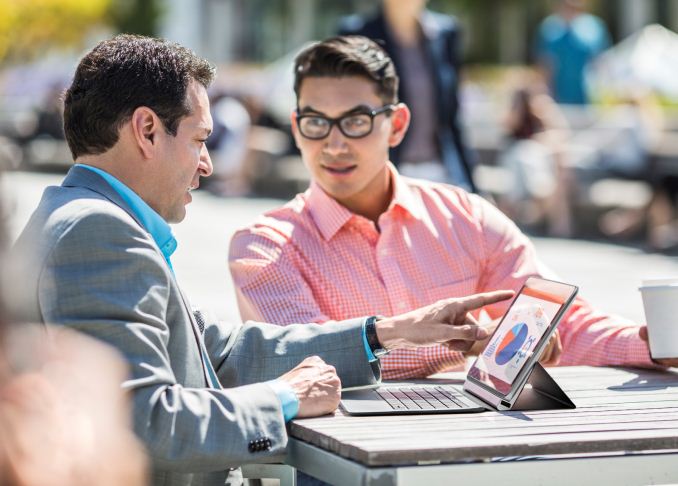 Today HP announced a collection of product updates with their “Business-First” approach to mobility; the full press release has all the pertinent details. The core message HP is trying to convey is that they are putting business use cases front and center. All of the devices announced today fall into the category of tablets, with a couple of them offering docks/keyboards that turn them into hybrid devices. Even the hybrids are more of a "tablet first" mentality, with fully detachable tablet portions rather than using a slider or 360 degree hinge. With eight new devices plus accessories to cover let’s just get straight to the products. 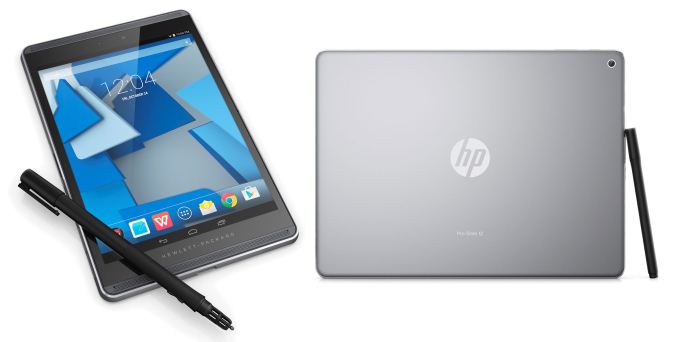 First up we have the HP Pro Slate 8 and HP Pro Slate 12, 8-inch and 12-inch Android 4.4 tablets with Snapdragon 800 SoCs (2.3GHz quad-core Krait 400) and 4:3 aspect ratio displays. The two new Pro Slates also include the HP Duet Pen, the first stylus to use Qualcomm’s Snapdragon digital pen technology. The “Duet” part comes from the stylus supporting a stylus tip on one end and a traditional ink tip on the other; you can use the ink tip with the optional HP Paper Folio (coming in the spring) to digitize drawings and other content apparently. Both tablets also support ARM TrustZone, with 256-bit hardware acceleration and are FIPS 140-2 certified for DAR and VPN encryption.

The HP Pro Slate 12 features nearly identical specifications, with the primary difference being the 12.3” 1600x1200 display. Camera options again consist of 2MP FHD video capable front-facing and 8MP FHD video capable rear-facing. The dimensions of the Slate 12 are 300mm x 222mm x 8mm with a weight of 850g, and it includes a 37WHr battery. Pricing starts at $569 for the Pro Slate 12.

For the education sector, HP also has the HP Pro Tablet 10 EE G1 (Education Edition) and HP Pro Slate 10 EE G1, which pass IP-52 testing for dust and moisture and come with Intel’s Bay Trail Atom Z3735G or Z3735F (up to 1.83GHz quad-core) SoCs. The main difference between the two parts is that Z3735F supports 2GB dual-channel memory while Z3735G supports 1GB single-channel memory. Both devices appear to use the same core design, with the Pro Slate 10 EE G1 coming with Android 4.4 while the Pro Tablet 10 EE G1 comes with Windows 8.1. The display is a 10.1” 1280x800 IPS panel, so nothing special there.

Features include 2x2 802.n WiFi with BT 4.0 + LE, micro SD, 3.5mm headset, micro USB, micro HDMI, 1.2MP front-facing and 2MP rear-facing or 2MP front-facing and 5MP rear-facing cameras, and a 28.5WHr battery. GPS is also supported. There are several optional accessories, including a stylus, keyboard, tablet sleeve, and multi-tablet charging station. The devices measure 280mm x 182mm x 14.4mm and weigh 855g, so these are definitely bulkier – and presumably more durable in order to withstand the rigors of students – devices. Oddly, the Pro Tablet model is listed as 850g – I’m not sure why it would weigh 5g less as Windows tends to be a heavier OS [hooray for nerd humor], but maybe there’s some minor difference I’m missing. Both devices are available now, with the Pro Slate 10 EE G1 starting at $279 and the Pro Tablet 10 EE starting at $299 for education and $349 for all other customers – though it does include a 1-year subscription to Office 365 personal. 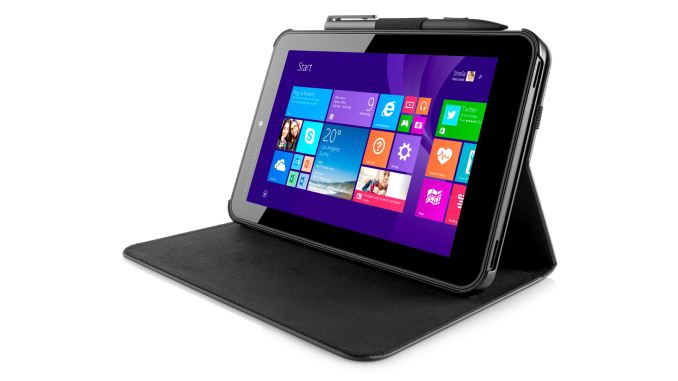 Wrapping things up, HP has the ElitePad 1000 G2 in Healthcare and Rugged versions. (Did anyone else see dollar signs just flash in front of them?) The core tablet appears the same but the chassis is slightly different; the Healthcare version comes with a an antimicrobial treatment and meets IP54 standards while the Rugged version is rated for IP65 and MIL-STD 810 and includes a protective jacket that also doubles the battery capacity. The tablet in either case features an Atom Z3785 (quad-core up to 2.39GHz) processor, 4GB RAM, 128GB eMMC storage, and a 10.1” 1920x1200 display with digitizer. Other features include 802.11n + BT4.0, mobile broadband support, NFC, one HDMI port, two USB 3.0 ports, 2.1MP front- and 8MP rear-facing cameras, and plenty of security features (as you’d expect for anything designed to be used in the healthcare sector). There’s an optional 2D barcode reader available as well.

The ElitePad 1000 G2 Healthcare and Rugged do have a few differences other than appearance. The Healthcare model has two digital microphones and a pen clip connection while the Rugged adds an RJ-45 and serial ports but apparently skips the built-in microphones. The standard battery is a 2-cell 30WHr and the Rugged as noted earlier doubles capacity with a second 30WHr battery in the jacket. The Rugged measures 285.5mm x 215mm x 33mm and weighs 1450g while the Healthcare is 278mm x 207.5mm x 20mm and weighs 1100g. Pricing of the Healthcare model starts at $1499 and it’s available now while the Rugged should start shipping next month with a starting price of $1599.

HP also mentions the availability of their $199 Retail Case of ElitePad, which adds two built-in cradles for mounting payment devices and the ability to dock to POS solutions. It also features hand and shoulder straps. The case is available now.