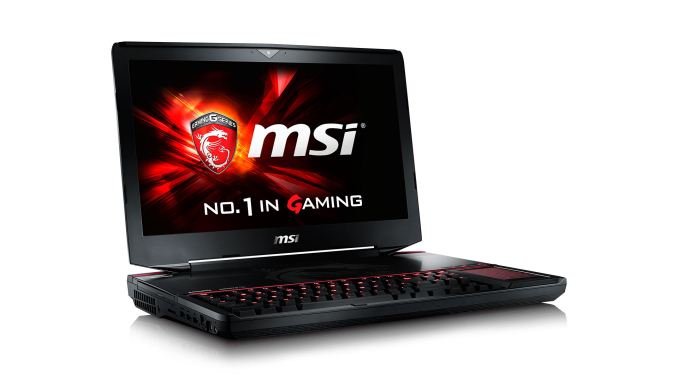 Last year, MSI teased us with some images of their upcoming GT80 Titan notebook, an 18.4” gaming behemoth with support for SLI GPUs and a full Cherry MX mechanical keyboard. Today we’re able to official reveal the full specs for the GT80, and as expected they’re quite impressive. Start with dual GPUs, up to the GTX 980M, and right off the bat we have the potential for better performance than a single desktop GTX 980. Of course, the cost of an SLI GTX 980M notebook dwarfs that of a GTX 980, but that’s part of the price you pay for mobility…or at least transportability.

Other specs are equally impressive. The CPU in the system being shown is the top-end Crystal Well offering from Intel, the i7-4980HQ. It has a slightly slower base clock compared to the socketed i7-4940MX (2.8GHz vs. 3.1GHz), but the maximum Turbo Boost is still 4.0GHz. As we discussed earlier, the GT80 also has a full mechanical keyboard with Cherry MX Brown switches – MSI may offer MX Red switches in the future, but for now the supply of MX Browns makes them a safer choice. (MSI also plans to provide a key puller and gold WASD keys, or at least we were shown some early key cap samples.) The GT80 also comes with four SO-DIMM slots with support for up to 32GB RAM, four M.2 SATA slots in RAID for SSD storage, an additional 2.5” bay for an HDD (or another SSD if you want to upgrade it), 802.11ac WiFi and GbE from Killer Networks, and a 1080p display.

That last item is actually one of the few potential weak spots in the design; we’re only just now starting to see higher quality (e.g. IPS) 17.3” displays for notebooks, and while we might see some higher resolution options later this year at present I’m not aware of anyone shipping a 2.5K, 3K, or 4K 17.3” panel. Moving up to the even more niche 18.4” notebook (luggable) market only further limits the options for the display. As such, it’s unfortunate that the GT80 Titan for now will ship with a 1080p display, though thankfully MSI informs us they're using a Samsung PLS panel. What’s particularly ironic is that this is one of the few notebooks out there that could legitimately handle a lot of games at 3K or 4K resolutions! MSI may also update the display to a higher resolution panel if/when such options become available.

There are a lot of naysayers when it comes to extreme gaming notebooks, and one of the biggest complaints is that you end up with an expensive system that can’t be upgraded. MSI is doing their part to at least partially address this shortcoming, as they are now guaranteeing support for at least the next two GPU cycles through select vendors in the US. So the GT80 ships with support for GTX 980M and should be able to run at some future point the “GTX A80M” and “GTX B80M” (whatever they end up being called). To take advantage of the GPU upgradeability, users in the US will have to ship their notebook to one of MSI’s System Integrator partners – MSI mentioned iBUYPOWER, XoticPC, GentechPC, and PowerNotebook as options right now. The SI will perform the upgrade, including swapping out the GPU as well as the cooling module, install driver and firmware updates, and then ship the updated notebook back to the user along with the old GPU(s) and cooling modules. Note that the GPU upgrade option is available for both the GT80 Titan as well as the GT72 Dominator.

I know quite a few users have been able to upgrade other gaming notebooks (including the GT70 series), but all of that was done “unofficially”. MSI is taking it a step further by publicly committing to notebook GPU upgrades, and while I don’t think many users would fork over an extra $1000 to upgrade one generation of GPUs (e.g. from 780M to 880M, or 880M to 980M), the potential to skip at least one generation makes this a far more useful feature. It will be interesting to see how this plays out long-term, as MSI might even support more than two generations of GPU upgrades.

Wrapping up the GT80, this is obviously a very large notebook (over 10 pounds) and I suspect battery life would measure under 30 minutes with even a moderate load. MSI does provide the option to turn off the GPUs and switch to integrated graphics if the user desires (a reboot is required), so battery life may still be okay in that mode. Note that similar to the GPU upgrade option, MSI has chosen to drop NVIDIA’s Optimus Technology for their GT72 and GT80 notebooks based on user feedback; Optimus remains part of the GS and GE lines. The placement of the keyboard at the front is also a conscious decision to make the notebook feel more like a typical desktop keyboard, and the touchpad on the right can also function as a 10-key if you press the num-lock area in the top-left.

GT80 is clearly a very niche product, but it’s an interesting alternative to the other SLI notebooks out there and we’ll be interested in doing a full review when the notebook starts to ship. Pricing and availability for the GT80 Titan have not been announced, but given the components it’s a safe bet that we’re looking at prices closer to $3000 if not more.