The Neophyte's Custom Liquid Cooling Guide: How To, Why To, What To Expect

If our whole hypothesis is that watercooling is (in most cases) superior to air cooling, then we need some measure of data to prove it. That means building our system and cooling it under air first, and seeing just how much overclocking performance we can get out of it before heat becomes too serious an issue. This is difficult to fully quantify; luck of the draw means we could wind up with stellar, efficient overclockers on both the CPU and GPU sides, or absolutely lousy ones. Haswell, in particular, seems to be afflicted with unusually high variation between individual chips.

To get some idea of how assembly goes in the Corsair Carbide Air 540, you can refer to my review. Suffice to say the system came together pretty easily. The modular nature of the SSD cages allowed me to remove all but one, and the 3.5" drive sleds went unpopulated but connected for the future. My biggest concern was the lack of clearance between the Noctua NH-U14S and the top GeForce GTX 780. 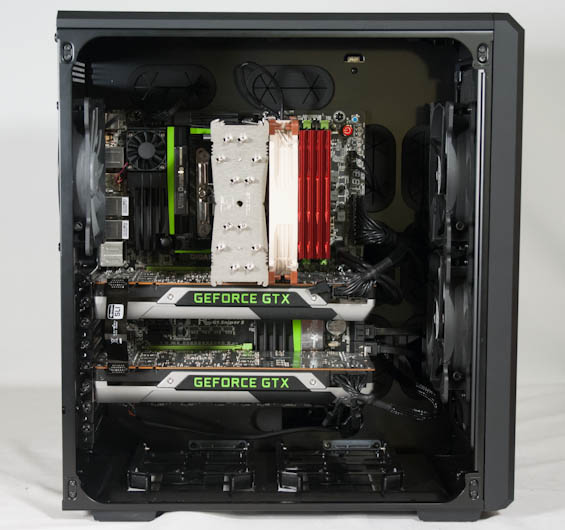 It looks like they're touching, but fear not, they're just playing the scariest game of "I'm not touching you" I've ever seen. This board is designed for quad-GPU graphics systems, which puts the primary PCIe x16 slot at the top. The upshot of that is the excellent spacing between the two cards: they're two slots apart, allowing for plenty of airflow between them. 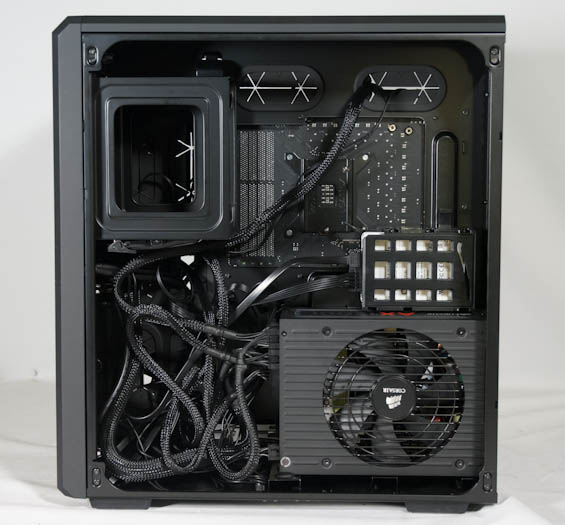 Ignoring for a moment the fact that I've always been lousy at cabling, we're presented with something of an issue. The Carbide Air 540 doesn't really necessitate neat cabling since that cubby in the bottom left of the photo is typically where the mass of cables always goes. However, the AX1200i is a very deep power supply, and that cubby is where I intend to put the pump and reservoir. This is, in my opinion, a failing of the Carbide Air 540's design: there's a tremendous amount of open space at the top right, and no real way to occupy it.

Overclocking on air wasn't actually tremendously difficult, but it's where I ran into some real issues with the i7-4770K. This is...not a spectacular sample. VRIN starts at 1.812V, and the VCore's default voltage is already at 1.2V. With load line calibration set to Turbo, I was able to get the chip stable at 4.3GHz, but VCore was reading ~1.3V in Windows. Thermals were reaching the low 90s under OCCT. 4.4GHz and 4.5GHz were both bootable, but thermally too dangerous. For stability testing, I did a five minute run of OCCT followed by a run of POVray 3.7 RC, per Ian's suggestion.

The two GeForce GTX 780s fared a bit better. I maxed out the power and temperature targets, and while the fans got pretty loud, I was able to get a +125 offset on the core and stunning +550 offset on the GDDR5, leading to a peak boost clock of ~1150MHz and a GDDR5 clock of 7.1GHz. Any higher than that on the GDDR5 would work, but produce artifacts. Peak boost was pretty tough to maintain, though, with the cards regularly dipping back at least a couple of boost bins under EVGA OC Scanner X. Stability testing was initially done with OC Scanner X, but I found it to be remarkably unreliable. Per Ryan Smith's suggestion, I switched to using a Crysis Warhead benchmark and then running Fire Strike Extreme in 3DMark. Crysis Warhead was pretty good at ferreting out unstable overclocks, but 3DMark was fantastic at it.

All in all, the overclocks were decent, although the i7-4770K apparently lived to underwhelm. I'm also a little disappointed the 780s couldn't hit 1.2GHz under boost on the core, but the excellent GDDR5 overclock takes some of the sting off of that.