Earlier today we published our first results using GLBenchmark 2.5, the long awaited update to one of our most frequently used mobile GPU benchmarks. As a recap, here's a quick introduction to the new benchmark:

GLBenchmark 2.5.0 primarily addresses a few shortcomings from the previous version of the Egypt test, primarily by moving to a more challenging version of Egypt. The new game test is named Egypt HD, and moves to a much more complex scene while keeping roughly the same test animation. Geometry count has increased, texture resolution has increased, there's a new water shader, more reflections, and more shadowing. In addition, the offscreen test has now moved to a default resolution of 1080p instead of the previous 720p, for a more challenging workload. This offscreen resolution is now customizable, but we'll be running 1080p for ease of comparison. In addition, the "classic" Egypt test is also a part of GLBenchmark 2.5.0 for those wishing to compare to 2.1.5. In addition, the triangle and fill subtests also stay around for a lower level look at OpenGL ES 2.0 performance. It should go without saying, but GLBenchmark 2.5 is still an OpenGL ES 2.0 test.

In our first article we ran GLBenchmark 2.5 on devices based on Samsung's Exynos dual and quad SoCs, Qualcomm's Snapdragon S4, NVIDIA's Tegra 2/3 and TI's OMAP 4. We had problems getting older devices to run, which is why we only had the abridged set of starting data on Android. In addition, GLBenchmark 2.5 for Android only supports Android 3.x and up.

GLBenchmark 2.5 is already available in the Google Play store, however the iOS version isn't quite ready for public release. Thankfully we've been able to get our hands on the iOS version and now have results for the new iPad, iPad 2 as well as the iPhone 4S. Just as before we've split results into tablet and smartphone performance. Let's tackle the tablets first.

Apple's A5X SoC is a beast as we found in our investigation of the chip earlier this year. The SoC marries a quad-core PowerVR SGX 543 with a quad-channel memory controller, good for up to 12.8GB/s of memory bandwidth. The combination of the two is a GPU that significantly outperforms anything else on the market today.

The A5X's dominance extends to GLBenchmark 2.5. Low level performance ranges from 33% faster than NVIDIA's Tegra 3 on the low end to over 3x the performance at the high end. Even Apple's A5 found in the iPad 2 tends to be the second fastest SoC in these tests. 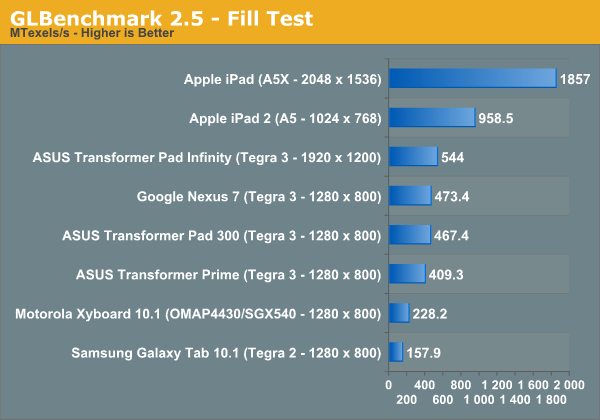 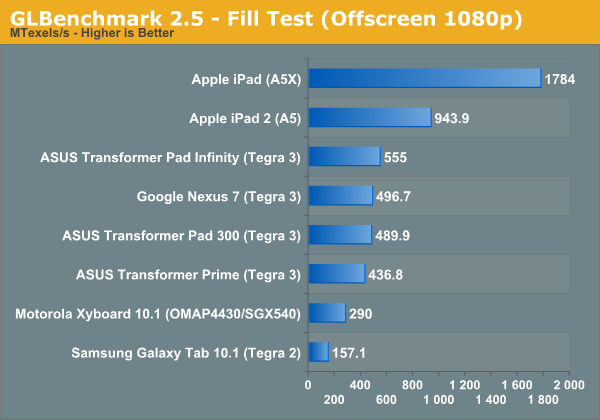 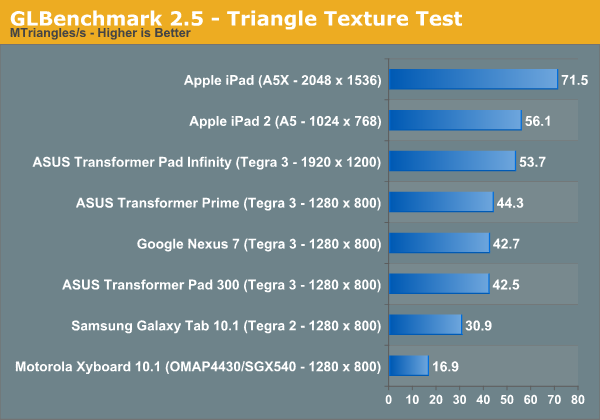 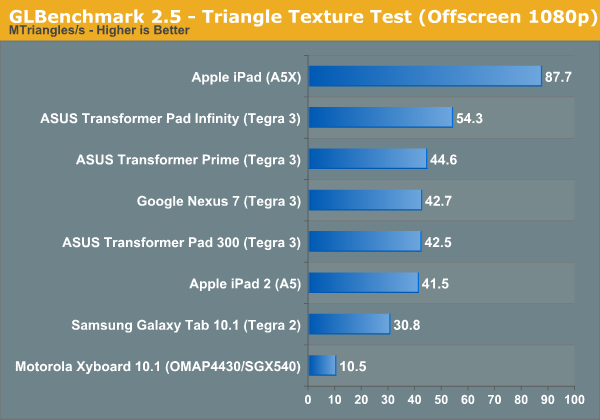 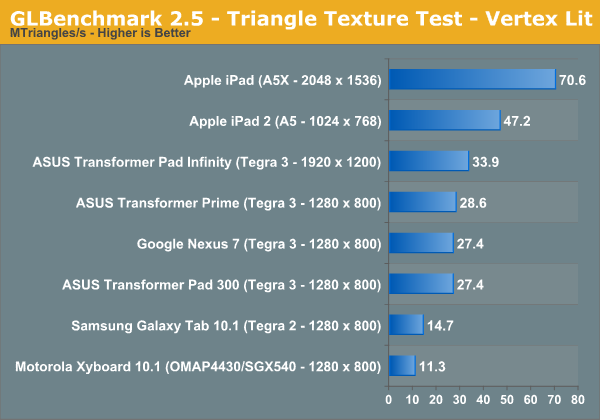 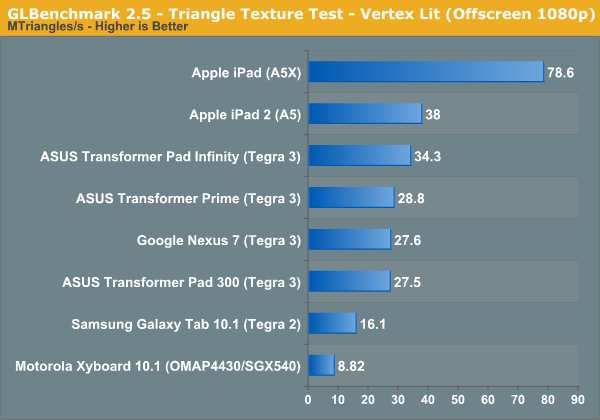 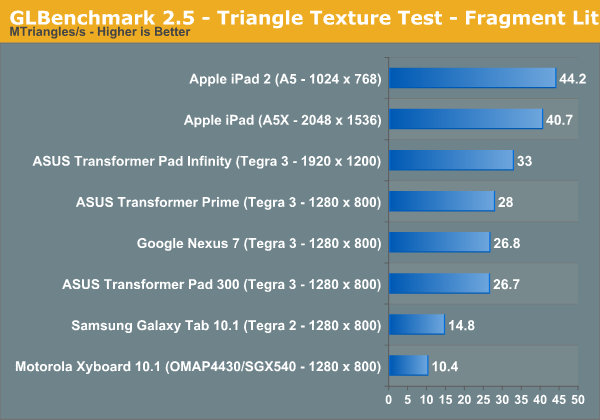 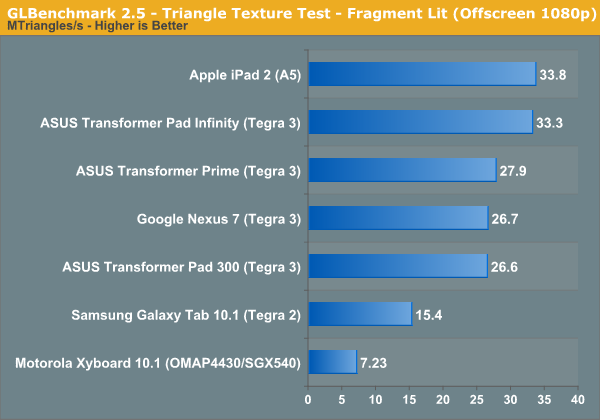 Egypt HD continues to be unrelentless in its punishment of mobile SoCs. The A5X is able to just keep up with the A5 thanks to the new iPad's significantly higher native resolution. Even the A5 running at 1024 x 768 can only muster 22 fps in the new Egypt HD test. It's going to take another generation of mobile GPUs to really sustain playable frame rates here.

The offscreen test runs without vsync enabled and at a standard 1080p resolution for all devices. In the case of the new iPad this works out to be a significantly lighter workload, which is responsible for the 20% higher frame rate. Even at 1080p though, the A5X isn't enough to sustain 30 fps. 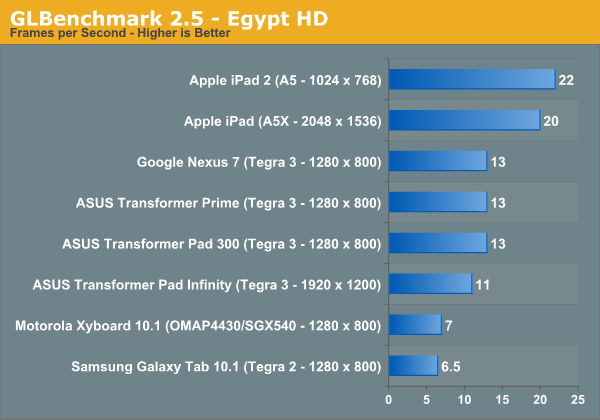 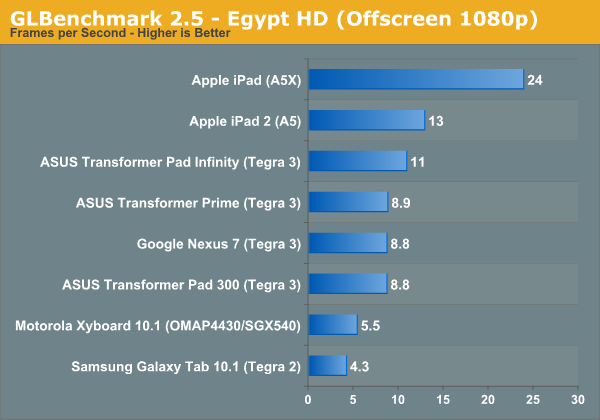 The classic Egypt benchmark once again gives us a good indication of present day gaming performance, which for the most part is fine on any of the latest SoCs. 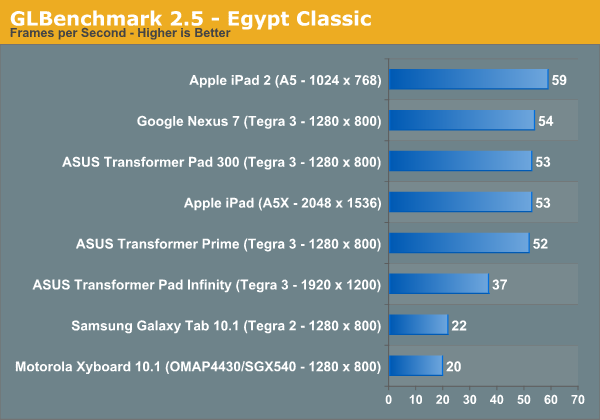 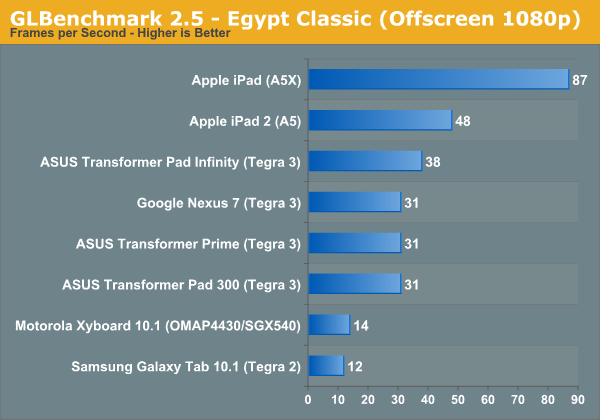