In and Around the Cooler Master Storm Enforcer

For how gaudy gaming cases can often be (and I'll readily admit the excellent In-Win BUC certainly falls into this category), the Cooler Master Storm Enforcer is actually fairly tame. While it's not liable to win any beauty contests standing next to BitFenix's Shinobi or Antec's Sonata series, it isn't aggressively hideous either, with the curves being at least presentable. The red LED fan in the front isn't too bright, and the window is in about the right place.

Things do get a little bit silly from the word "go" though. When you open the hinged drive bay door, you'll see the four external bays feature ventilated covers. This is useful ventilation that barrels directly into the processor's tower cooler, but the door isn't ventilated in any way, essentially preventing enough air from at least passively entering the front. Instead intake is taken care of by the 200mm fan below the drive bays, and as you'll see when we get to benchmarks...between this one and the ones in the Corsair 600T, I'm none too impressed with these giant fans.

The main side panel is fastened using thumbscrews while the back panel uses standard screws, and it seems like thumbscrews should've been used in both places since the case is designed to allow you to route cables behind the motherboard tray. When you do open things up, though, you find a remarkably spacious and well thought out interior with virtually every modern convenience. 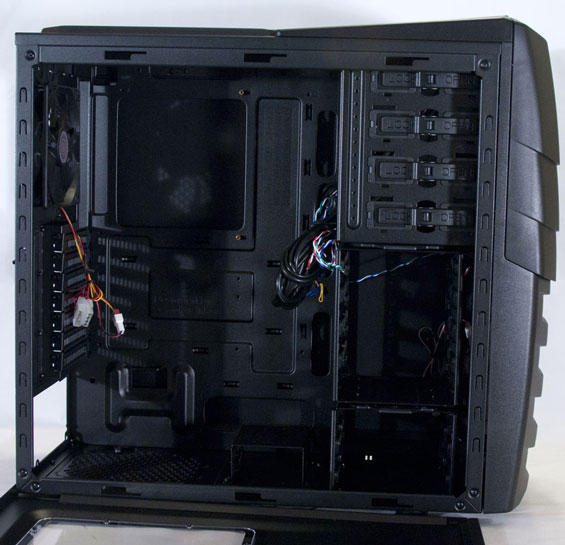 There's a generously sized cutout in the motherboard tray for those of us having to suffer with compensating for Intel's dire heatsink mounting system, along with holes around the motherboard for routing cables including a much appreciated one above the motherboard specifically for that frustrating AUX 12V line. The area above the motherboard is also fairly spacious; there's room for installing a single 200mm fan or two 120mm fans, but I'd almost be inclined to leave it open just to make cabling a little easier. Besides, the native configuration of the Enforcer is a positive pressure design which has become vogue as of late.

Although in a perfect world there'd be eight expansion slots in a column (I keep my second video card hanging off the last slot on my board to allow the top card better airflow), the seven is the norm and the "auxiliary" one above them is a nice touch. SilverStone's GD04 has a similar feature and it's actually quite welcome, as I mounted a fan controller in that case. The Enforcer isn't liable to need a fan controller, though: both fans have 3-pin leads attached to molex adaptors. If you didn't make the mistake of buying a Gigabyte board with BIOS level fan controls that could be considered archaic at best (like mine), your motherboard should be able to handle these just fine. Life without molex connectors is sweet. 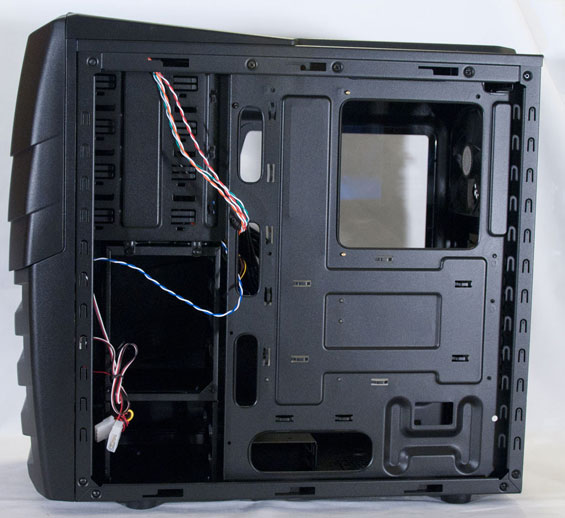 Just below the expansion slots is the power supply bay at the bottom of the case, capable of handling the power supply in its regular orientation or upside-down; depending on your power supply's cabling and whether or not you use the included removable 2.5" drive cage, you may very well have to flip the power supply to keep the cables from butting up against the cage. That drive cage is also one of my favorite features of the Enforcer and it's something I spotted when I reviewed the War Factory Sentinel desktop last month, which used a Cooler Master HAF 912. It can handle two 2.5" drives which should be just enough for a modern build.

The 3.5" drive bays are oriented with the connectors for the drives facing behind the motherboard tray to allow for both easy cable routing and easy drive installation. 3.5" drives are installed using rails that snap into the mounting holes on the drive, and from there the drive slides in and locks into place. It's simple and painless and the drive is secure. 5.25" drives are mounted using a different toolless mechanism: each drive bay has a toggle on it that switches between "open" and "lock," and it works as advertised. If the drive still feels a little loose (ours did) you can secure it using screws.