The 2010 CTIA wireless show also saw the introduction of Samsung's latest Android phone, the Galaxy S. As many people have already noticed, it bears an uncanny resemblance to the iPhone in terms of the user interface (despite running Android). However, its specs happen to be actually much more impressive, both on the inside and the outside. With a 4" AMOLED screen and a 1 GHz processor, it is indeed better than the iPhone 3GS hardware wise. As already noted in the opening remarks, this phone uses an app processor that is likely very similar to Apple's A4. Engadget covered the launch at CTIA and shot this video showing the similarity that the phone shares with the iPhone 3GS. 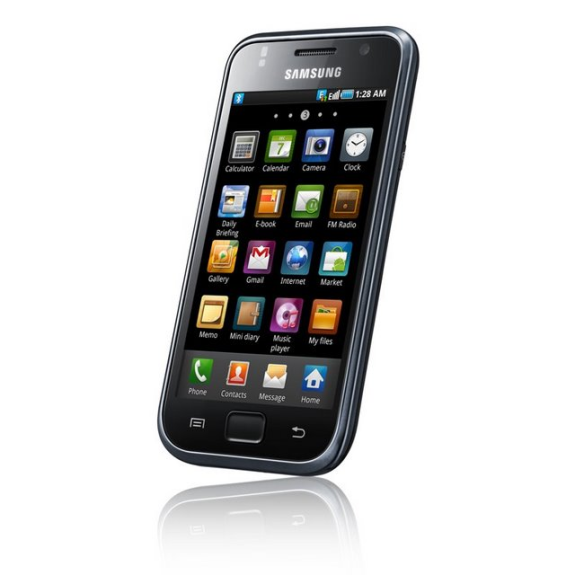 Looking into the specs of the S5PC110 a little more, one realizes how much it shares in common with the purported specs of the Apple A4. They were both fabricated in the Samsung foundry, and the Cortex-A8 core in both these chips are capable of running at 1 GHz. In fact, it is believed that Samsung and Apple both utilized the services of Intrinsity to harden the Cortex-A8 core to enable it to run at 1 GHz in Samsung's 45nm process. The process of hardening a core involves optimization of the layout and placement of the components of the processor in order to improve the speed of operation as well as reduce the power consumption.
Semiconductor companies which integrate ARM's designs into their products usually take it as a hard macro from the foundry. This saves them the licensing costs, and can act as an incentive for the fabless company to choose a particular manufacturer over another. However, some companies may decide to devote time and effort to optimize the original design in layout and not rely on the foundry to do it for them. This is usually done by big companies which can spare the manpower and the associate costs. Usually they also have an architectural license, which gives them the freedom to even modify the pipeline behavior, and not just the layout. Examples of such companies are Marvell and Qualcomm. Sometimes, the hardening of the macro may be outsourced to another firm. These dedicated firms do a better job than the foundy themselves (since the latter may be able to devote only a small amount of resources for the purpose of hardening). Intrinsity is one such dedicated firm which has been employed by both Samsung and Apple (through the Samsung foundry) to harden ARM's version of Cortex-A8. Their version is used in both the Apple A4 and the S5PC110.
The GPU core in the S5PC110 as well as the Apple A4 is Imagination Technology's PowerVR SGX540. This product line has already proved its worth in the previous iPhones, and the SGX540 in the S5PC110 promises more than 90 million triangles per second of graphics performance. This is more than four times the performance of the graphics engine in the Snapdragon chip present in HTC EVO 4G. Even users who do not play games will find that this performance translates to a responsive and pleasing user interface.
The major difference between the Apple A4 and the S5PC110 is the fact that the latter can decode 720p HD videos as evidenced in the video above. It is possible that Apple decided to go with the decode acceleration provided by the NEON engine in Cortex-A8 (which would explains the complete lack of HD support in the iPad), while Samsung decided to go with their custom HD decode accelerator (Some suspect that it is a member of the PowerVR VXD family which enables the HD decode in S5PC110). We will get to know further about this platform when it starts shipping.
Why does the S5PC110 deserve a place in this roundup? The sole reason is that the next iPhone is probably based on a variant of this app processor. In effect, we are being provided with a sneak peek at the hardware capabilities of the next iPhone hardware platform.
Sprint HTC EVO 4G Final Words
Tweet
PRINT THIS ARTICLE
POST A COMMENT