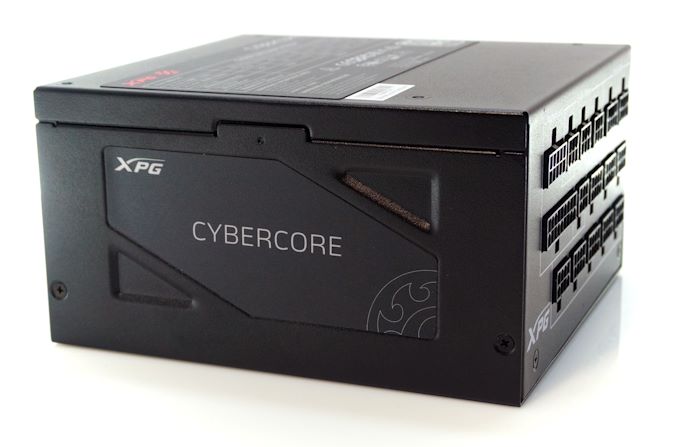 ADATA is an established manufacturer of PC components and peripherals. The company was founded in Taiwan a little over 20 years ago. The growth of the company in the last decade in particular has been rather explosive, and by 2016 ADATA was already the second largest memory-related products manufacturer in the world. With virtually no room to grow into the memory market anymore, ADATA began to diversify its product portfolio in multiple directions, ranging from PC cooling systems to electric powertrains.

One major expansion for ADATA has been to make further inroads into the PC gaming market, with the mother company founding a new brand, XPG (which stands for “Xtreme Performance Gear”). The XPG logo was initially only found on performance RAM modules, which ADATA had leagues of experience on. Nowadays, ADATA is greatly broadening the products bearing the XPG logo by releasing gaming peripherals, coolers, and even power supply units.

In today’s review, we are taking a look at XPG's Cybercore PSU, the latest and best PSU range that ADATA added into their products lineup. Th  Cybercore PSU that we are reviewing today boasts an impressive maximum output of 1300 Watts and is 80Plus Platinum certified. We will be seeing if any of its features and/or performance can give it an edge over the broad competition it faces in the market.

We received the XPG Cybercore 1300W PSU in a fairly large and sturdy cardboard box. The design of the box is very simple but its striking red color has it standing out from afar. Only the most basic of product information is printed on the front of the box, but plenty of details can be found on the sides and rear. 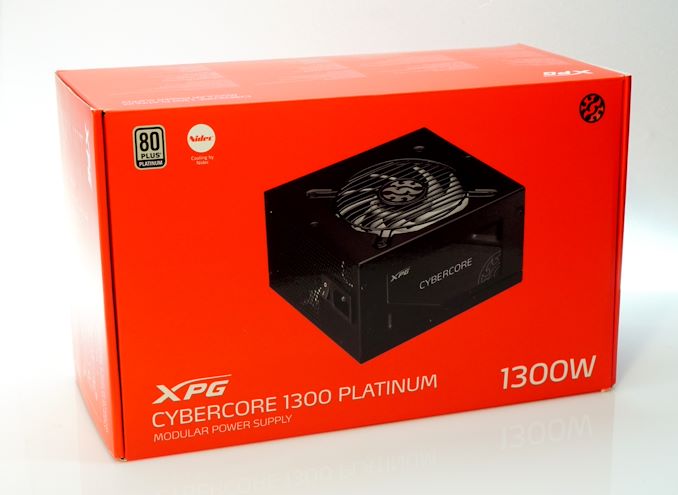 Inside the box, we found a relatively frugal bundle for a PSU of this tier. XPG supplies the basic AC power cable, a few cable ties, four mounting screws, a card full of stickers, and a manual. There are no extras to be found, whereas we usually prefer to see a few cable straps accompanying units with so many cables and intended to power many devices. 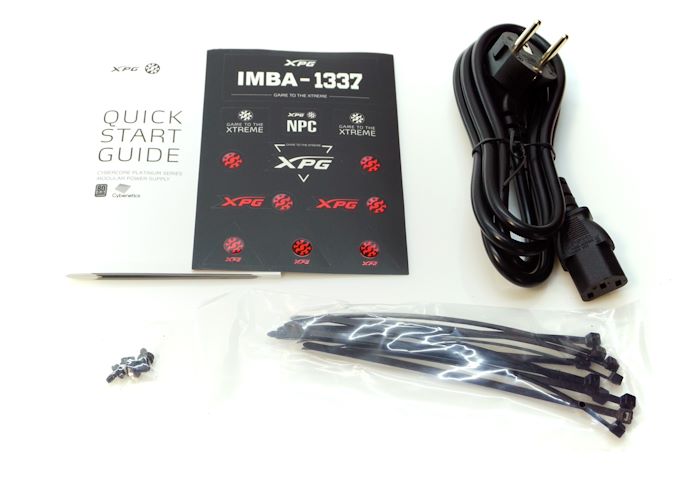 The XPG Cybercore 1300W PSU is a fully modular design, allowing for the removal of every DC power cable, including the 24-pin ATX cable. All of the cables are black, with matching black connectors. The ATX, EPS, and PCI Express cables are also sleeved, while the SATA and Molex connector cables are bare. We also found not one but two floppy disk power adapters inside the packaging, a very odd thing for such a product in 2022. What is even more peculiar is that XPG only includes two floppy disk adapters with the 1300W version of the unit; the 1000W version, meanwhile, comes with a single floppy adapter. 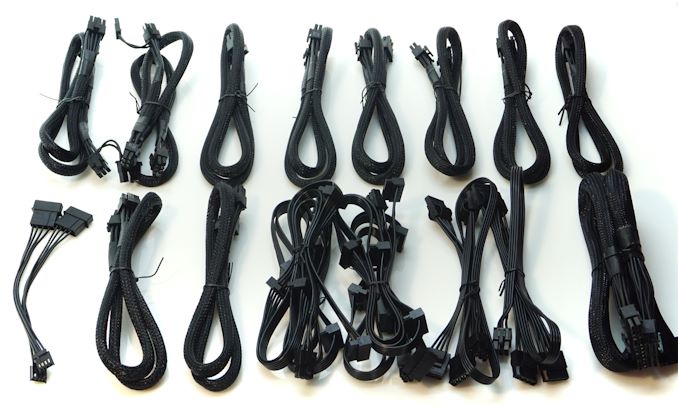 The Cybercore 1300W PSU is not particularly impressive visually, with XPG opting for a relatively simple design that is based on fundamental geometric shapes. Despite its very high-power output, the chassis of the XPG Cybercore 1300W is just 160 mm long, only a bit longer than that of a fully ATX compatible unit. The depth of the chassis greatly increases the compatibility of the Cybercore PSU, allowing it to be the heart of very powerful (but still compact) builds. 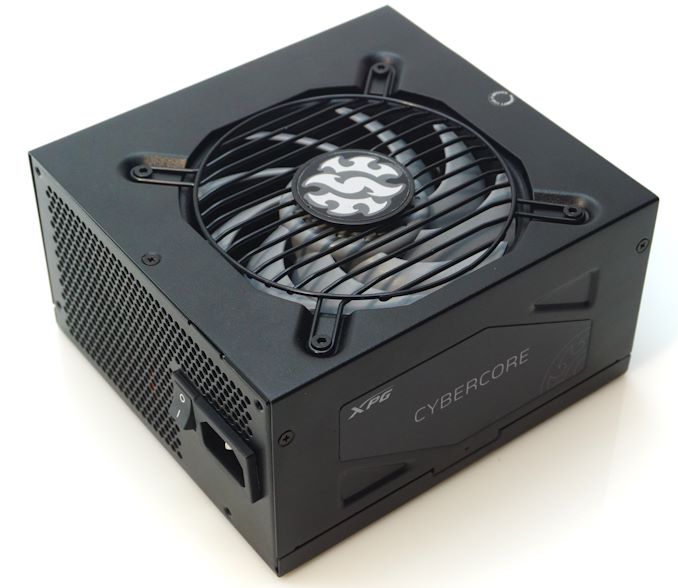 On the sides of the unit, a hexagon sticker with the series name lies between two embossed triangles. The designer tried to merge function with aesthetics here, as a closer inspection reveals tiny exhaust vents across the edge of the embossed triangle, which are clearly for the targeted cooling of specific parts placed near it.  The top side of the chassis is dominated by a large sticker with the unit’s electrical specifications and certifications. Most of the bottom side is granted to the 120 mm cooling fan. 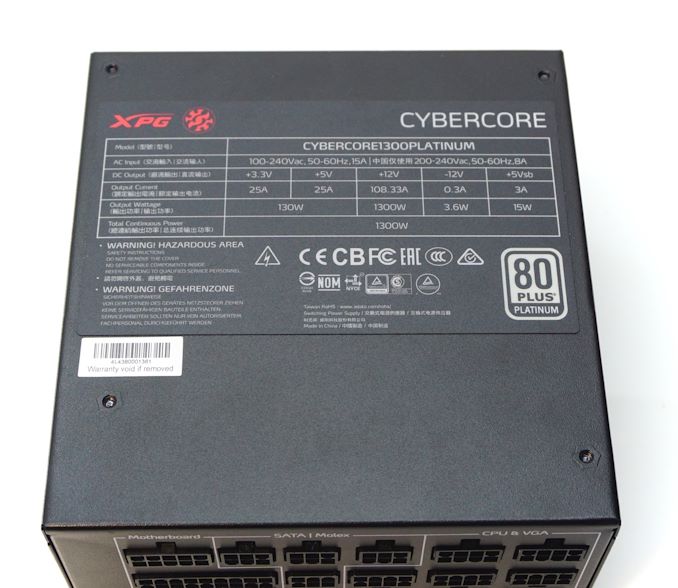 A typical on/off switch can be seen at the rear side of the unit, beside the power connector. The front side of the XPG Cybercore 1300W PSU, as expected from a fully modular unit with this kind of power output, is filled with the connectors for the modular cables. The connectors are grouped, but the grouping is a little abnormal. The ATX cable splits to two connectors towards the PSU, one with ten pins and one with eighteen pins, and curiously, are stacked rather than being laid out in the same row. Coupled with the fact that the latches are on opposite sides – one up, one down – this causes the ATX cable to twist towards its end and leads to a little bit of visual dissonance. 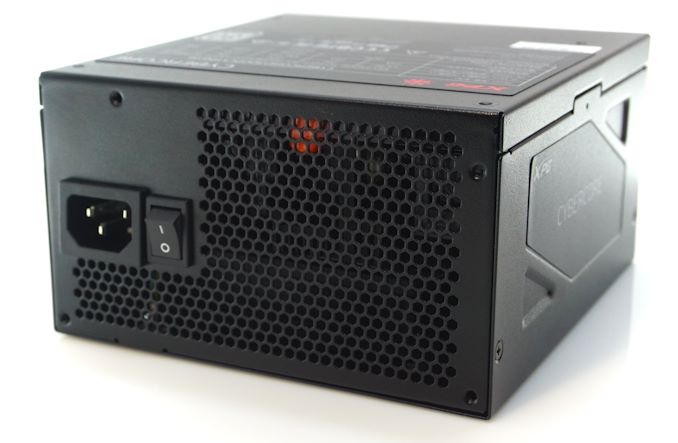 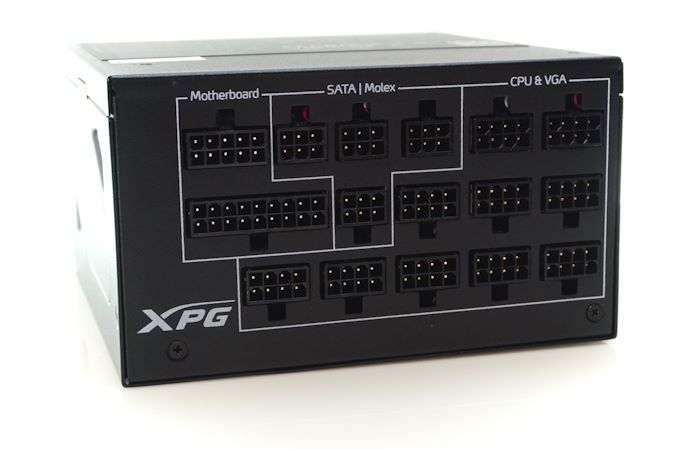 As advertised, XPG is using a fan made by Nidec to cover the cooling needs of the Cybercore PSU. The designer was forced to go with a 120 mm fan here because Nidec’s 140 mm fan would not fit. These dual-ball bearing engine fans are designed with long-term reliability in mind, with XPG advertising that they can last up to 60.000 hours at 60°C, which is a very impressive figure. This particular model has a maximum speed of 2150 RPM, which is a high rotational speed for a 120 mm fan, but it should not be reaching that speed under normal operating conditions. 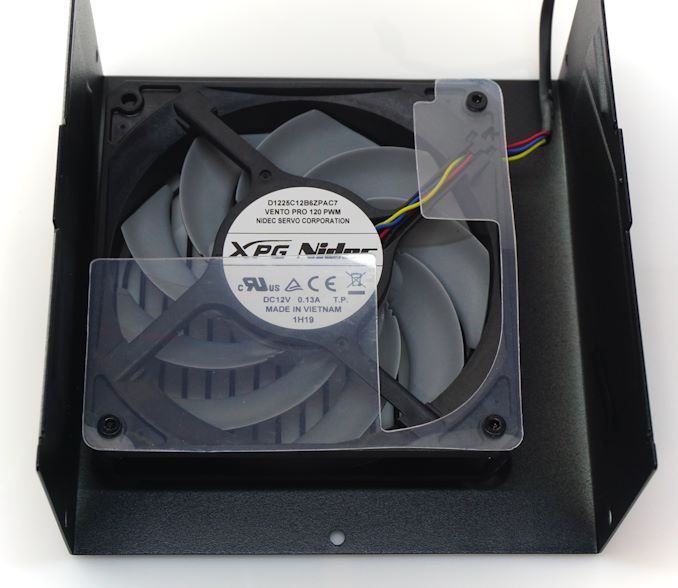 The platform that the Cybercore PSU series is based on is brand new. It is a design by CWT (Channel Well Technologies) and seems to be an advanced, more compact version of the now aged CST platform. It is a hybrid platform, with digital control of critical operations but also analog controllers present. 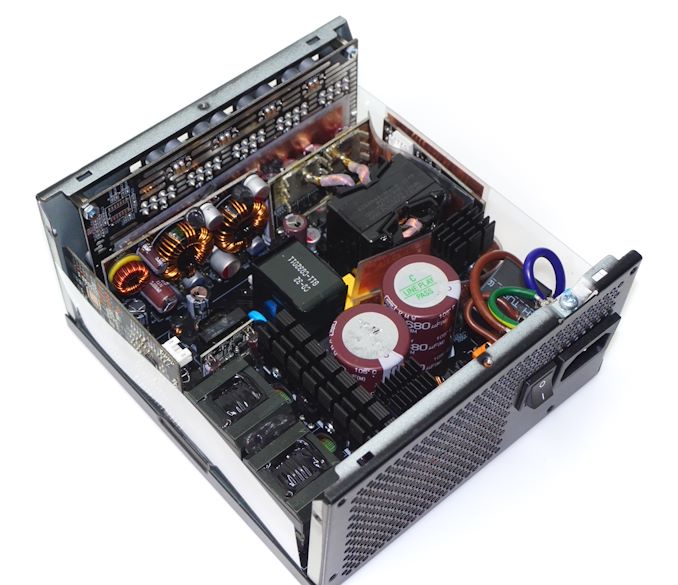 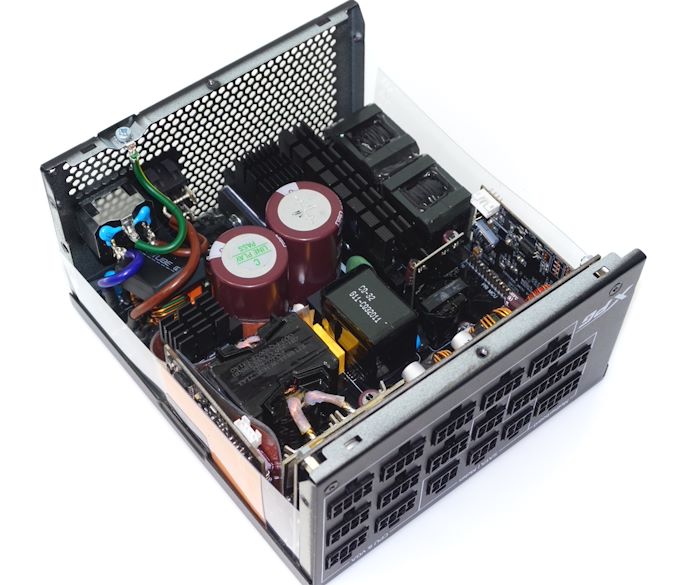 The filtering stage is typical for units with that kind a power output. It comprises a total of six Y capacitors, two X capacitors, and two filtering inductors leading to a dual input rectifying bridge configuration. The bridges are placed on their own heatsink, which has plenty of surface area. The two massive 400V/680μF APFC capacitors are made by Nippon Chemi-Con, followed by two large filtering coils. The active APFC components are on a long heatsink right between the capacitors and the inductors. 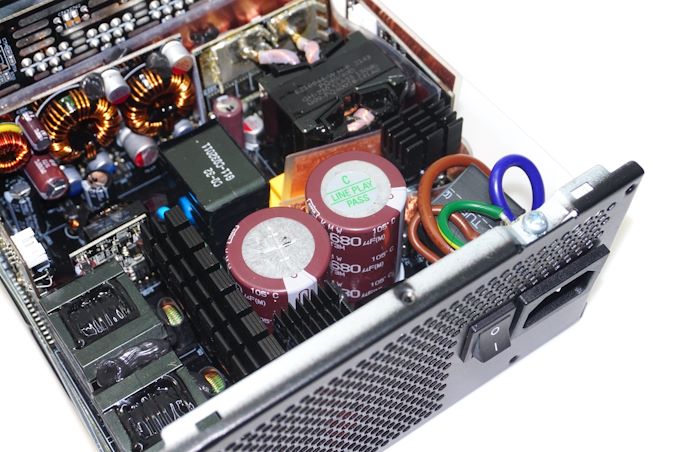 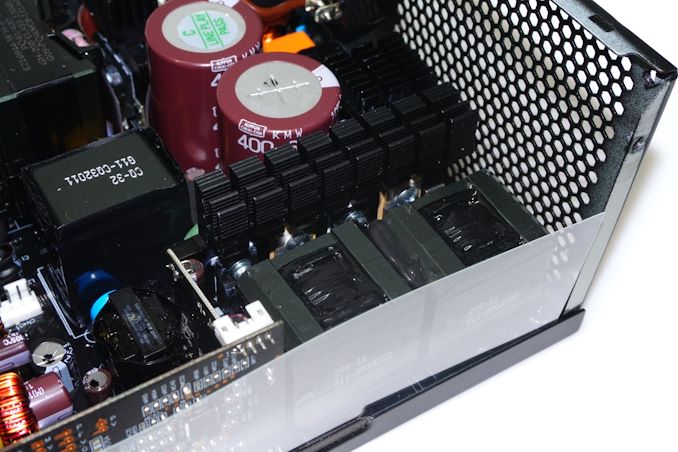 Four transistors form a full-bridge inversion topology at the primary side of the unit. The large transformer output is connected to a vertical PCB with eight Infineon OptiMOS power MOSFETs (016N06NS) that generate the 12V rail. The 3.3V and 5V lines are being generated via the DC-to-DC conversion circuits found on a separate vertical PCB right next to the PCB housing the converters. Multiple shielded copper strips can be seen around the PSU, providing both electrical and electromagnetic isolation between the high frequency components. Rubycon, and Nippon Chemi-Con supply the electrolytic capacitors, while FPCAP and United Chemi-Con supply all of the polymer capacitors. 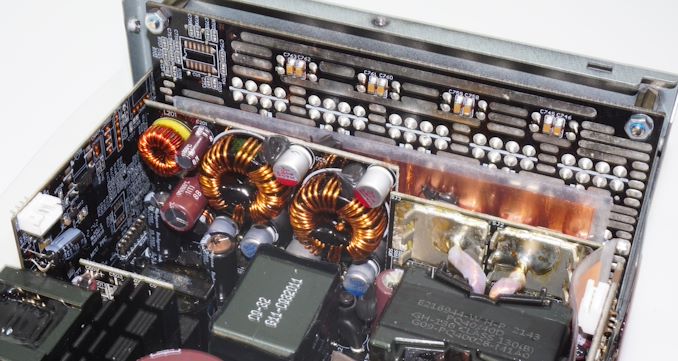 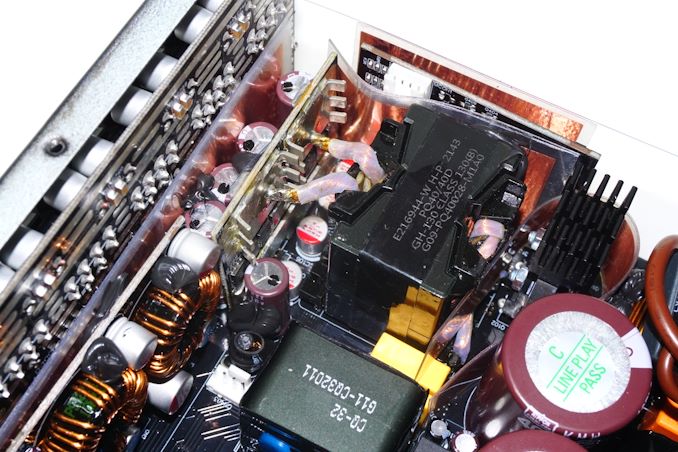 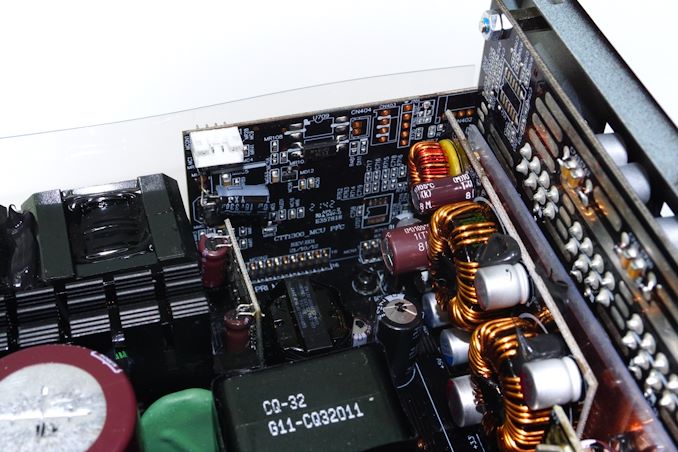 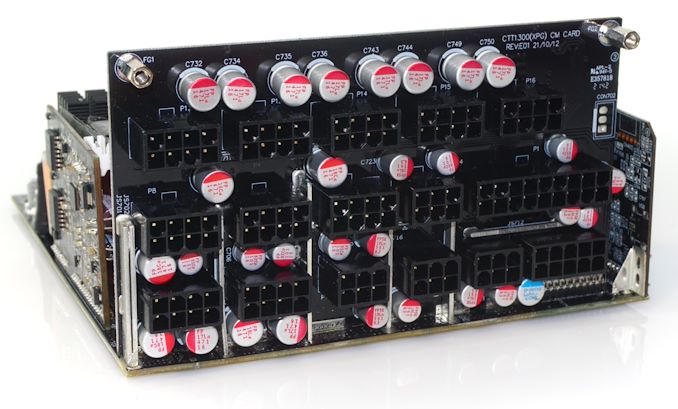