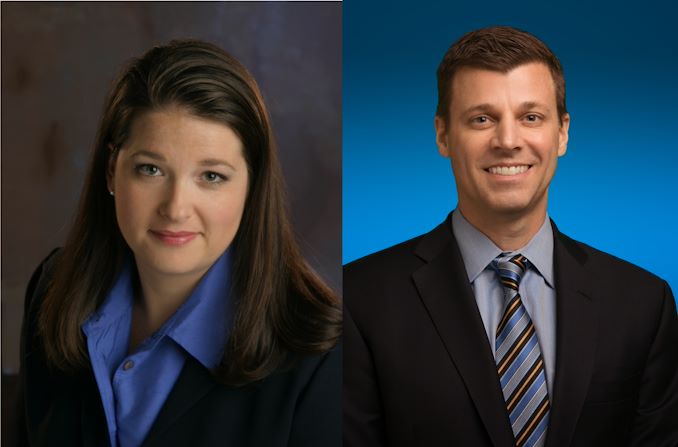 At the close of play today, Intel is announcing two major changes at the top of its organization. The big one is that EVP and GM of Intel’s Client Computing Group, Gregory Bryant, who led the company in their CES messaging only last week, is moving on to new ventures. After his 30-year stint at Intel, he is to be replaced by 25-year veteran Michelle Johnston Holthaus, currently EVP and Intel’s Chief Revenue Officer in charge of Communications, Sales, and Marketing. There’s also a new CFO coming in from Micron.

It’s a big surprise, seeing Gregory Bryant leave Intel. He has been leading the consumer platform team for a number of years, since June 2017, covering the last few generations of CPU and mobile launches through Intel’s tough times with bringing 10nm to revenue. He has overseen the launch of the Intel Evo initiative, and comes from an engineering background, although preferred to let other senior engineers talk to their strengths. Greg will leave Intel at the end of the month, for a new opportunity. It's actually quite a strange announcement, given that he led Intel's presentations at CES only last week - a time when he must've known that one foot was out the door. Analysts are reporting that his goals involve becoming a CEO somewhere, and that the opportunity he is leaving for is a big one. It also reduces the number of Bryants at senior levels of Intel down from three to one (Diane Bryant left in 2017).

Bryant’s replacement is Intel EVP and Chief Revenue Officer Michelle Johnston Holthaus. She is another Intel lifer, having spent 25 years at the company, joining in 1996. She has held multiple roles in reseller management, HQ central marketing and operations, global account management, and currently sits as GM of the Sales, Marketing, and Communications group. In recent memory Holthaus was the keynote speaker at Intel’s Partner Summit. Bringing her to the role is likely a move to strengthen Intel’s bonds with its OEM partners, an aspect that is seeing increased competition in traditional client OEM markets. It also means that Intel has two women leading its largest business units – Holthaus for Client Computing, and Sandra Rivera for Datacenter.

During the transition, Intel will be searching for a new leader of Intel’s sales, marketing, and communications group.

Also announced today is that Intel is to get a new Chief Financial Officer. It was already announced that current CFO, George Davis, was to retire in 2022 and the search was on for a replacement. That replacement has been found in the form of David Zinsner, who comes from his role as CFO at Micron. This position is effective January 17th, which is shortly before Intel’s end-of-year financial results on January 26th. George Davis is to remain at Intel in an advisory role until May to ensure a seamless transition. It’s key to point out that Intel’s search for a new CFO has been thought to aim to find an individual who has the same CAPEX expenditure aspirations as CEO Pat Gelsinger.