Last year when we reviewed the M1 inside the Mac mini, we did some rough power measurements based on the wall-power of the machine. Since then, we learned how to read out Apple’s individual CPU, GPU, NPU and memory controller power figures, as well as total advertised package power. We repeat the exercise here for the 16” MacBook Pro, focusing on chip package power, as well as AC active wall power, meaning device load power, minus idle power.

Apple doesn’t advertise any TDP for the chips of the devices – it’s our understanding that simply doesn’t exist, and the only limitation to the power draw of the chips and laptops are simply thermals. As long as temperature is kept in check, the silicon will not throttle or not limit itself in terms of power draw. Of course, there’s still an actual average power draw figure when under different scenarios, which is what we come to test here: 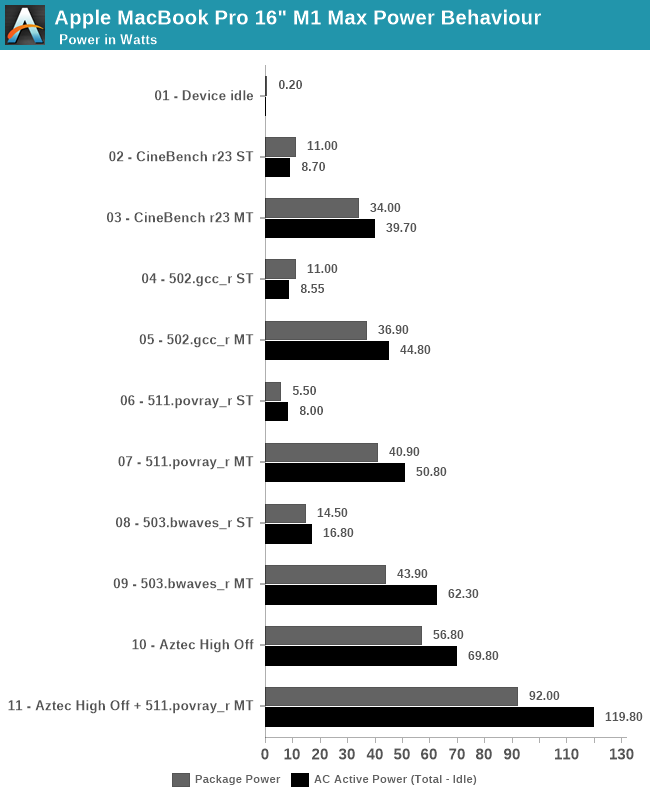 Starting off with device idle, the chip reports a package power of around 200mW when doing nothing but idling on a static screen. This is extremely low compared to competitor designs, and is likely a reason Apple is able achieve such fantastic battery life. The AC wall power under idle was 7.2W, this was on Apple’s included 140W charger, and while the laptop was on minimum display brightness – it’s likely the actual DC battery power under this scenario is much lower, but lacking the ability to measure this, it’s the second-best thing we have. One should probably assume a 90% efficiency figure in the AC-to-DC conversion chain from 230V wall to 28V USB-C MagSafe to whatever the internal PMIC usage voltage of the device is.

In single-threaded workloads, such as CineBench r23 and SPEC 502.gcc_r, both which are more mixed in terms of pure computation vs also memory demanding, we see the chip report 11W package power, however we’re just measuring a 8.5-8.7W difference at the wall when under use. It’s possible the software is over-reporting things here. The actual CPU cluster is only using around 4-5W under this scenario, and we don’t seem to see much of a difference to the M1 in that regard. The package and active power are higher than what we’ve seen on the M1, which could be explained by the much larger memory resources of the M1 Max. 511.povray is mostly core-bound with little memory traffic, package power is reported less, although at the wall again the difference is minor.

In multi-threaded scenarios, the package and wall power vary from 34-43W on package, and wall active power from 40 to 62W. 503.bwaves stands out as having a larger difference between wall power and reported package power – although Apple’s powermetrics showcases a “DRAM” power figure, I think this is just the memory controllers, and that the actual DRAM is not accounted for in the package power figure – the extra wattage that we’re measuring here, because it’s a massive DRAM workload, would be the memory of the M1 Max package.

On the GPU side, we lack notable workloads, but GFXBench Aztec High Offscreen ends up with a 56.8W package figure and 69.80W wall active figure. The GPU block itself is reported to be running at 43W.

Finally, stressing out both CPU and GPU at the same time, the SoC goes up to 92W package power and 120W wall active power. That’s quite high, and we haven’t tested how long the machine is able to sustain such loads (it’s highly environment dependent), but it very much appears that the chip and platform don’t have any practical power limit, and just uses whatever it needs as long as temperatures are in check.

Comparing the M1 Max against the competition, we resorted to Intel’s 11980HK on the MSI GE76 Raider. Unfortunately, we wanted to also do a comparison against AMD’s 5980HS, however our test machine is dead.

In single-threaded workloads, Apple’s showcases massive performance and power advantages against Intel’s best CPU. In CineBench, it’s one of the rare workloads where Apple’s cores lose out in performance for some reason, but this further widens the gap in terms of power usage, whereas the M1 Max only uses 8.7W, while a comparable figure on the 11980HK is 43.5W.

In other ST workloads, the M1 Max is more ahead in performance, or at least in a similar range. The performance/W difference here is around 2.5x to 3x in favour of Apple’s silicon.

In multi-threaded tests, the 11980HK is clearly allowed to go to much higher power levels than the M1 Max, reaching package power levels of 80W, for 105-110W active wall power, significantly more than what the MacBook Pro here is drawing. The performance levels of the M1 Max are significantly higher than the Intel chip here, due to the much better scalability of the cores. The perf/W differences here are 4-6x in favour of the M1 Max, all whilst posting significantly better performance, meaning the perf/W at ISO-perf would be even higher than this.

Finally, the Intel and GeForce GPU go up to 256W power daw when used together, also more than double that of the MacBook Pro and its M1 Max SoC.

The 11980HK isn’t a very efficient chip, as we had noted it back in our May review, and AMD’s chips should fare quite a bit better in a comparison, however the Apple Silicon is likely still ahead by extremely comfortable margins.

Huge Memory Bandwidth, but not for every Block CPU ST Performance: Not Much Change from M1
Tweet
PRINT THIS ARTICLE
Comments Locked