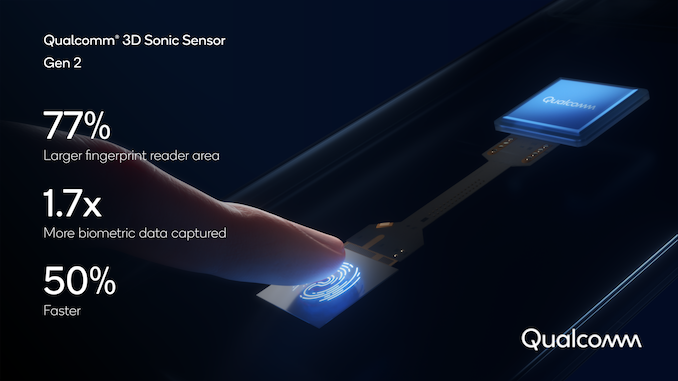 Today Qualcomm is announcing the release of their new 2nd generation ultrasonic fingerprint sensor. Back in 2019, the company had released its first-generation sensor, most notable for being used in Samsung’s Galaxy S10 and S20 series of devices, offering an alternative and very different technology compared to the competition’s optical based fingerprint sensor solutions.

Amongst the largest criticism of the first-generation devices were the activation size as well as the recognition speed of the sensor, something that Qualcomm is now addressing with the new 2nd generation design.

The new sensor is said to be 77% larger, now covering an area of 64mm² in a 8x8mm form-factor, compared to the 36mm² 4x9mm design of the first generation design. The company states that this allows for 1.7x more biometric data, and the larger area should also help with more lax positioning of your finger when unlocking the phone.

The sensor continues to be extremely thin, coming in at only 0.2mm – likely one of the largest advantages compared to competitor optical fingerprint sensors which require at least some kind of lens system and are usually thicker.

New faster processing will also allow the new generations sensor to be 50% faster than its predecessor, hopefully closing the performance gap to optical sensors which generally have proven to still be superior in terms of speed.

Qualcomm’s new fingerprint sensor is expected to debut in devices in early 2021 – given the company’s track record with Samsung, I wouldn’t be surprised if the S21 series employs the new unit.