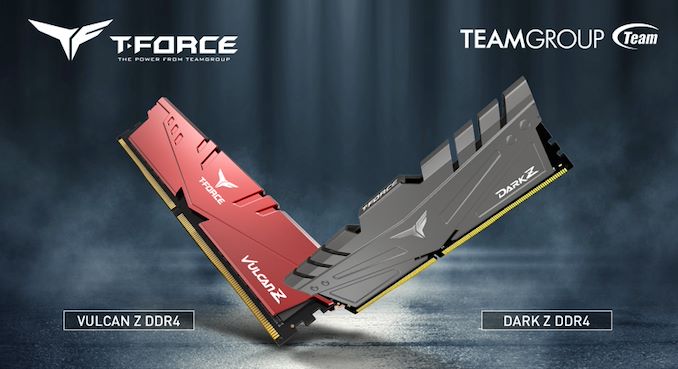 One of the world's largest DRAM memory manufacturers TeamGroup has unveiled its first DDR4 memory kits featuring 32 GB sticks under its gaming-focused T-Force brand. The T-Force Vulcan Z and T-Force Dark Z will the first from the brand to be offered in 32 GB x 2 kits in dual-channel kits.

Starting with its T-Force Vulcan Z range, TeamGroup intends to release two different speeds with its 32 GB single stick options. It will be made available in DDR4-2666 and DDR4-3000 32 GB x 2 kits, which can operate in both single and dual-channel. The T-Force Vulcan Z features an aluminium heat spreader which is available in red or silver, with TeamGroup claiming that it uses selected memory IC chips for stability and performance.

The T-Force Vulkan 2 x 32 GB will be available in just DDR4-3000, with CL 16-18-18-38 latency timings with an operating voltage of 1.35 V. Like the Vulkan Z, the Dark Z also features aluminium heat spreaders, with an armoured design and individually selected memory ICs. The Vulkan Z range will also be available with a choice of two colors, grey and red.

TeamGroup doesn't specifically go into detail about which memory ICs its new 2 x 32 GB kits will feature, which opens the door for the manufacturer to change which vendor memory chips it uses. All of TeamGroup's DDR4 kits support XMP 2.0 memory profiles, with the T-Force Vulkan Z and Dark Z kits compatible with both Intel and AMD platforms.

Each T-Force Vulcan Z and Dark Z memory kit across its range has a lifetime warranty. At present, TeamGroup hasn't stated when stock will hit retail channels, nor has it stated its intended pricing structure for the new 2 x 32 GB memory kits.