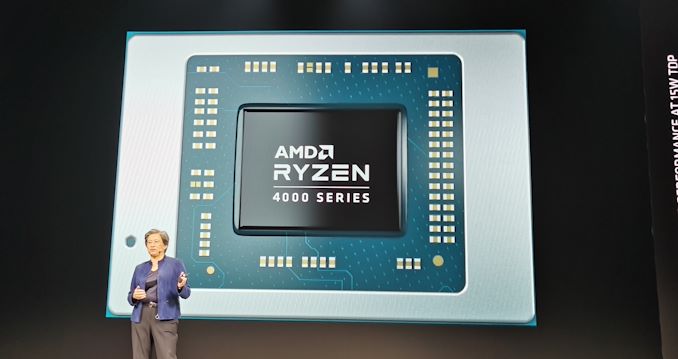 The notebook market has not been kind to AMD over the last decade – for a long, long time the company was only ever seen as the discount option for those on a strict budget. It didn’t help that OEMs only saw AMD in that light, fitting bulky units with sub-standard displays and storage options meant that even retailers were only presenting AMD as something for the budget conscious.

All that seems set to change. Fast forward to 2020, and notebook users are eagerly awaiting the arrival of products based on AMD’s latest Ryzen Mobile 4000 series processors, which combine up to eight Zen 2 cores and upgraded Vega graphics into a small CPU for the notebook market. AMD has already made waves with its Zen 2 cores in the desktop and enterprise space, and the company has already announced it plans to put eight of those cores, along with a significantly upgraded graphics design, into a processor that has a thermal design point of 15 W. These 15 W parts are designed for ultraportable notebooks, and AMD has a number of design wins lined up to show just how good an AMD system can be.

The same silicon will also go into 45 W-class style notebooks, with a higher base frequency. These parts are geared more towards discrete graphics options, for gaming notebooks or more powerful business designs. The gaming market (at 45 W), the commercial market (15W to 45W) and the ultraportable market (15 W) are where AMD is hoping to strike hardest with the new hardware. 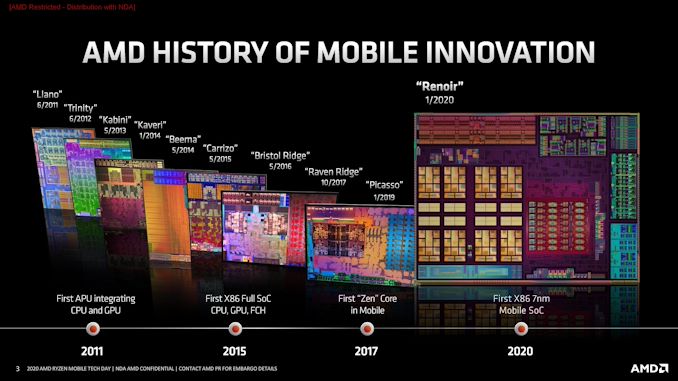 Since earlier this year in January, at the annual CES trade show, we saw a number of early designs based on the new Ryzen Mobile 4000 family. These included TUF laptops from ASUS, the Lenovo Yoga Slim 7, Lenovo Thinkpads using Ryzen Mobile 4000 Pro, Dell’s G5 15 SE, the Acer Swift 3, and the ASUS Zephyrus G14 to name but a few. All of these are key design wins for different segments of the market, and the two that AMD seem to be pushing most are the Zephyrus and the Yoga Slim 7. 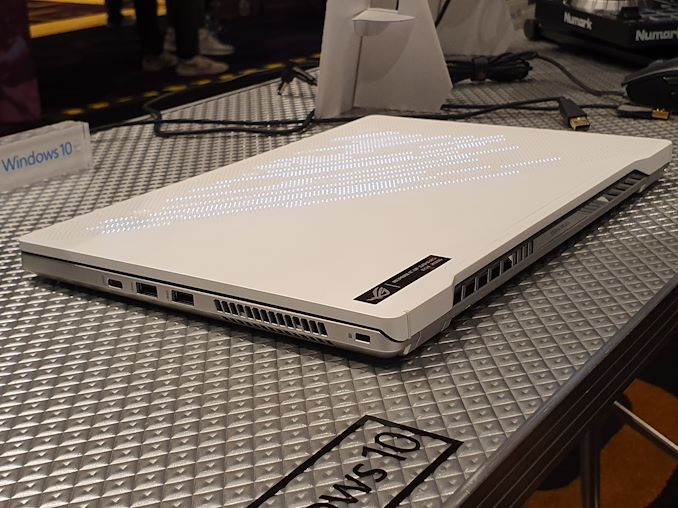 The ASUS Zephyrus G14 is set to be the only 14-inch laptop on the market that has both a H-series processor, a 1080p 120Hz panel, and an RTX 2060 discrete graphics card solution in that form factor. The aim here is to have something both portable and high performance, with within the right thermal envelope, for gamers and users who need something with a bit more oomph while on the road, such as video editors who need up to 32 GB of DDR4 inside. There’s an added rear panel effect with moveable LEDs, just for a DJ to show off or to show a logo. The Zephyrus G14 will also be the first design with a HS-series processor, which we’ll cover in a bit.

The second key system AMD is promoting is an ultraportable, the Lenovo Yoga Slim 7. It comes with the highest grade Ryzen Mobile 4000 15 W U-series processor, the Ryzen 7 4800U, and is designed to turbo up to 25 W when needed based on the design of the chassis. Paired with Wi-Fi 6, a FreeSync display, and LPDDR4X, this is the system that AMD is using for all their battery life performance demonstrations.

AMD is working with Lenovo to source these units for press sampling, which should have been for today, however due to the world situation the shipment of these have been delayed, and users will start to see reviews from next month, even though they might be available in China before then. 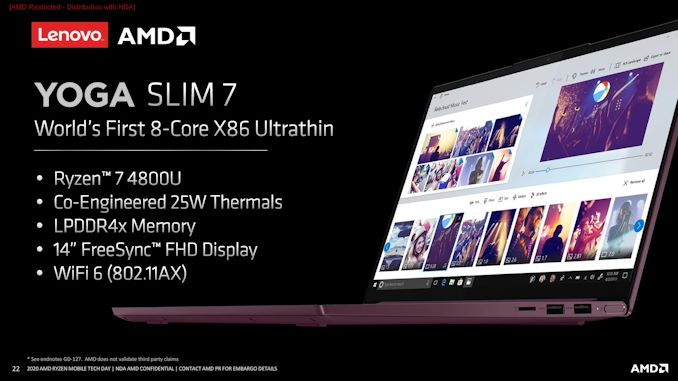 As with Intel’s mobile processors, AMD’s latest lines fall into two categories. For the ultraportable and low end gaming market, we have 15 W parts called ‘U-Series’. For the gaming market where discrete GPUs are used, there are 45 W parts called ‘H-Series’. The commercial market will take from both sets, and later in the year we might see mini-PC manufacturers (like Zotac, perhaps) use one or the other to bolster their portfolio.

Not previously announced until today is the AMD Ryzen 9 4900H family, the new halo Ryzen Mobile 4000 hardware. These are AMD’s first processors with the Ryzen 9 designation, and we have a specific news story about them here.

The H series processors are split into H and HS parts. For all except the Ryzen 9, the specifications between the two match, aside from the TDP, which is 45 W for the H and 35 W for the HS, but both of them are considered ‘H-Series class’ processors. Technically the H series can be de-rated to run at 35 W, however to get the S in the name requires collaboration with AMD, which we’ll get into later.

The U-series parts, by the nature of the lower TDP, ultimately have a lower base frequency than the others. These CPUs also tend to rely more on the integrated graphics, which means that the power budget is often split between the CPU and GPU. AMD is also going for an interesting mix here of parts with-and-without simultaneous multithreading. The bottom processor, the Ryzen 3 4300U, even has half of its L3 cache disabled. 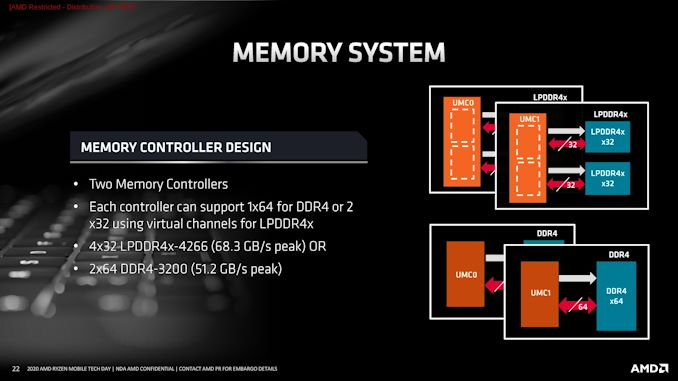 All of these CPUs support DDR4-3200 (up to 64 GB, 51.2 GB/s) and LPDDR4X-4266 (up to 32 GB, 68.3 GB/s), and it will be up to the OEM which one to use: LPDDR4X should offer better idle battery life and peak performance, but DDR4 offers more capacity. It is likely that we’ll see the ultraportable market use LPDDR4X, while the more gaming and workstation class systems will use DDR4.

All of the CPUs are PCIe 3.0 only, rather than PCIe 4.0 like the desktop parts. This is primarily due to power – the double bandwidth of PCIe 4.0 requires more power, and given that storage or graphics rarely need peak speeds, AMD felt the product portfolio would prefer battery life in this regard. Each chip has sixteen PCIe 3.0 lanes, split such that x8 is available for a graphics card, and two x4 links for storage. There are separate PCIe lanes for other modules such as Wi-Fi 6 or mobile network access (4G/5G). 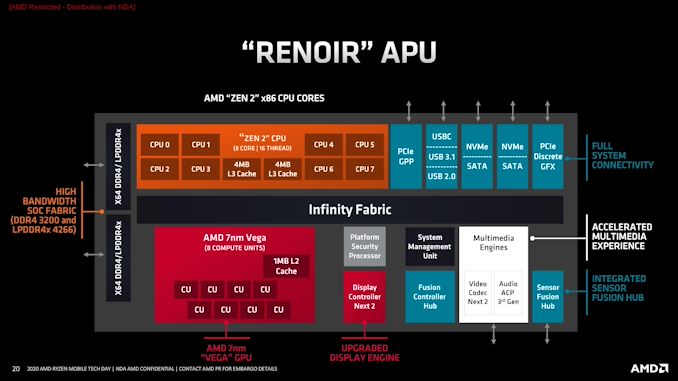 Display support for the CPUs allows for two 4K monitors through DisplayPort over Type-C, an additional 4K monitor if Thunderbolt is used, and a fourth monitor if USB 4.0 used. AMD has designed Renoir to not need additional chips to detect which way a Type-C is connected – that is all handled on die. With the display and USB support, the processor allows for concurrent USB 3.2 and DisplayPort use, with the peak DP v1.4 8.1G HBR3 standard in play using display stream compression (DSC).

AMD surprised us by offering some details on the silicon here. The APU was manufactured on TSMC’s N7 process (7nm DUV), using a 13-layer metal stack. The whole die is 9.8 billion transistors. In January, we calculated through photography the die size to be about 150-151 mm2. AMD is stating that it is 156 mm2, which given previous measurements, probably doesn’t include scribe lines. 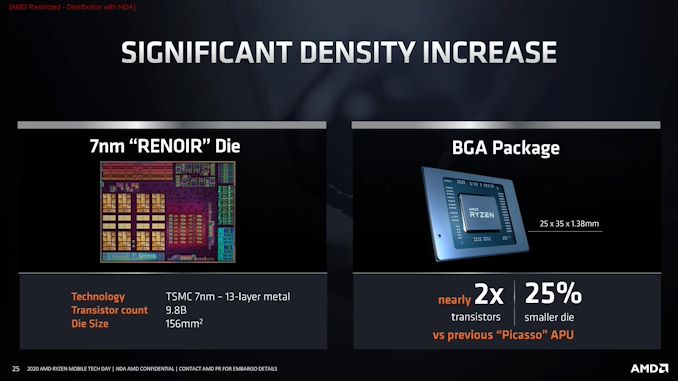 While we don’t have performance numbers for Renoir today, due to world events, we do have some deeper details into the platform that have not been disclosed before. These cover CPU and GPU improvements, significant changes to power management, Infinity Fabric, and how AMD is taking better control of thermals, performance, and battery life this type around.

AMD has stated that they expect to see 100+ designs using Renoir this year, with a number of those being key design wins that the company has not had in recent memory. Considering where the company was only four years ago, surrounded in a vicious negative feedback loop, this is a significant upswing in OEM participation, putting AMD in premium designs. Ultimately it’s the consumer who wins, as we should now see some serious competition in the notebook market.