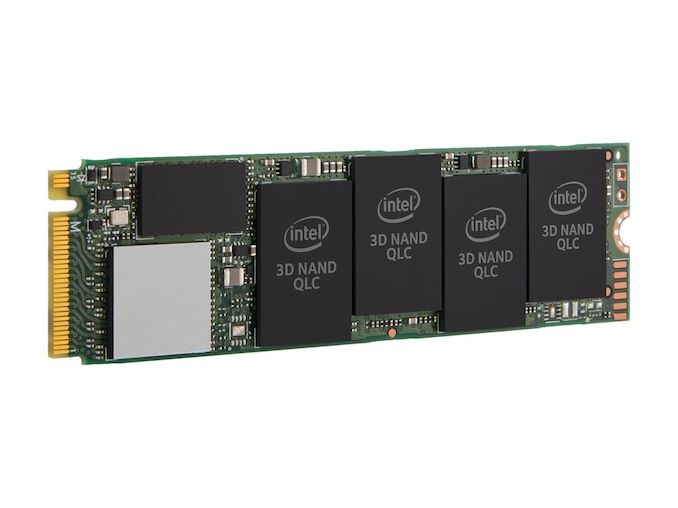 Two months after being announced, the Intel SSD 665p is set to be released today. The 665p is the successor to the 660p, the most (only?) successful consumer SSD based on four bit per cell (QLC) NAND flash memory. The 665p makes minimal changes to the design of the 660p; the most important of which is switching from Intel's 64-layer 3D QLC NAND to their newer 96-layer 3D QLC NAND.

Intel claims to have the first 96L QLC in production, though Western Digital has already announced they are shipping products using their own 96L QLC (albeit not in internal SSDs yet). It appears that production of Intel's 96L has not ramped up much yet, because today we are only getting the 1TB SKU of the 665p—the 2TB model won't be arriving until Q1 of 2020. The 512GB model won't be happening at all. The 512GB 660p was much more susceptible to the performance downsides of QLC NAND than the larger models, and given the pricing of 512GB-class TLC-based drives, it's reasonable for QLC product lines to start with a minimum of 1TB.

The 665p continues to use the Silicon Motion SM2263 NVMe SSD controller, with a small DRAM cache and a massive variable-size SLC cache:

The switch to 96L QLC has enabled minor performance improvements. The basic performance specs have been boosted by up to 13.6%, which isn't enough to noticeably impact real-world use cases. This is still an entry-level NVMe SSD that could get by just fine with a mere PCIe 3.0 x2 connection even though it supports an x4 link. As usual, these specs are for burst performance where the SLC cache is in use; post-SLC write speeds are still slower than what any vendor wants to put on a spec sheet. When Intel announced the 665p in September, they showed CrystalDiskMark results for the 660p vs the 665p that cast the 665p in a much better light, but their numbers for the 660p were suspiciously low.

Much more important than the performance changes is the write endurance boost the 665p brings compared to the 660p. Both capacities of the 665p have 50% higher rated write endurance than the 660p, bringing them up to about 0.16 drive writes per day (DWPD) from the 660p's 0.11 DWPD. This is still a lot lower than the 0.3 DWPD that is typical for low-end consumer SSDs that use TLC NAND, but the increase does show that Intel's feeling more confident in their second generation of QLC.

Looking to the future, Intel's next step after 96 layers will be to 144 layers. That generation of 3D NAND will be QLC-only at first and will arrive in the second half of 2020. So Intel may end up doing a second refresh of this SSD about a year from now before this product segment is ready to move to PCIe 4.0.

Newegg is currently selling the 1TB 660p for $82.99 as part of their Black Friday sales, making it one of the cheapest SSDs on a per-GB basis, in any form factor, interface or capacity. We're not expecting the 665p to debut at such a low price, but after the holiday sales are over the 665p will probably overtake the 660p as the most affordable NVMe SSD.

Intel is not sampling the 1TB 665p for review at this time, but we've asked for a review sample of the 2TB model when it becomes available.