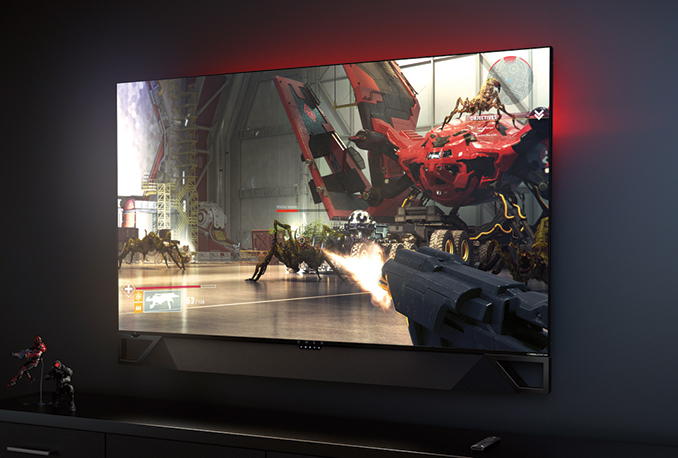 Early last year NVIDIA and its partners announced the Big Format Gaming Display (BFGD) initiative, with the goal to bring to market TV-sized 4K gaming monitors with a high variable refresh rate, high-end HDR, and SHIELD TV functionality. This year BFGDs will be released at last. Just days before CES kicks off, HP introduced its OMEN X Emperium 65, one of the world’s first big format gaming displays, and one that also comes equipped with a 120 W soundbar. The product will be available next month, but its price will be akin to its size: large.

The HP OMEN X Emperium 65 display uses a 64.5-inch 8-bit AMVA panel featuring a 3840×2160 resolution, 750 – 1000 nits brightness (typical/HDR), a 3200:1 – 4000:1 contrast ratio (minimum/typical), 178° viewing angles, a 120 - 144 Hz refresh rate (normal/overclocked), and a 4 ms GtG response time with overdrive enabled. Just like other G-Sync HDR monitors released to date, this one is equipped with a 384-zone full direct-array backlight to offer a finer-grained HDR experience, and enhanced with quantum dots to guarantee precise reproduction of 95% of the DCI-P3 color space. 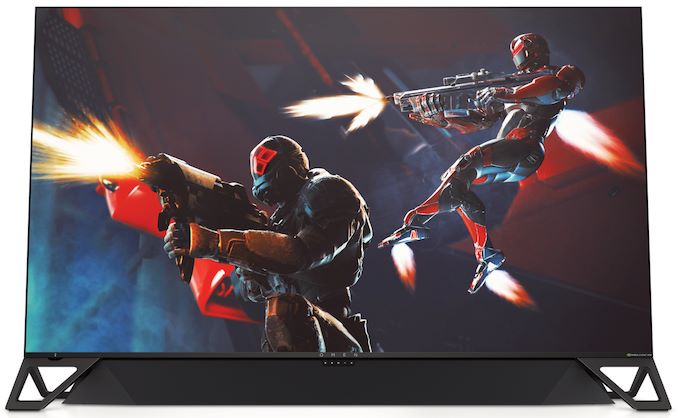 Besides its dimensions and G-Sync HDR display tech, one of the key selling points of the OMEN X Emperium 65 is bundled OMEN X Emperium Soundbar designed with gaming in mind. The soundbar is rated for 120 W of output power, and it sports three stereo amps and Low Frequency Array (LOFAR) technology to avoid the need for a subwoofer. The soundbar can work in two modes: one tuned for gaming and another tuned for general entertainment. 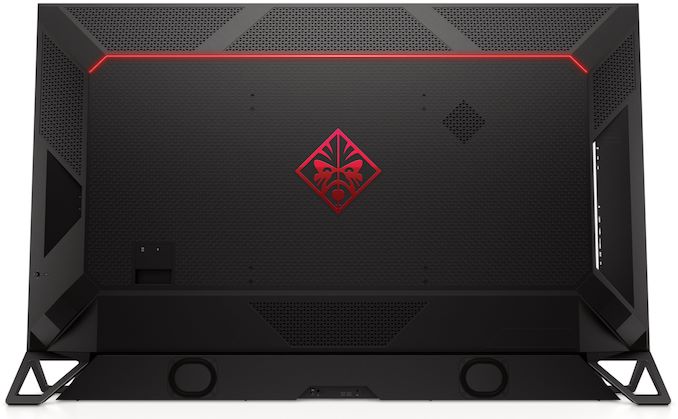 Speaking of entertainment, it is necessary to note that the OMEN X Emperium 65 also comes with built-in SHIELD TV console (Tegra X1, etc.) along with 802.11ac Wi-Fi as well as GbE connectivity. The integrated SHIELD TV allows the TV to directly to play some SHIELD TV/Android games, though in practice it's more likely to be used for various media streaming services (Amazon Video, Netflix, etc.). The monitor is VESA DisplayHDR 1000-certified, so it meets the highest standards for a PC HDR monitor. However HP hasn't clarified what HDR transport formats the display supports; while HDR10 is going to be a given, we're curious whether the high-end display will also support Dolby Vision. Meanwhile, since we are talking about a TV-sized gaming display, it obviously has a rather low pixel density of around 68 PPI, which will make it a rather poor choice for work and its main (if not sole) purposes will be games and entertainment.

Moving on to connectivity. The OMEN X Emperium 65 has a DisplayPort 1.4 input and three HDMI 2.0b inputs that support HDMI ARC, which is enough to connect a PC, a couple of game consoles, and a Blu-ray player. When it comes to audio, it has a line out and an S/PDIF out. In addition, the monitor has a dual-port USB 3.0 hub. One interesting feature that the display has is a special sensors that detects user's hand and lights up the ports. Another cool feature is an adjustable RGB lighting on the back.

The monstrous OMEN X Emperium 65 is set to hit retail in late February, assuming everything goes well and the performance of the device satisfies HP and NVIDIA. However it won't be cheap: with a list price of $4,999, this is a rather unprecedented MSRP for a consumer monitor, and for that matter higher than a lot of high-end TVs. 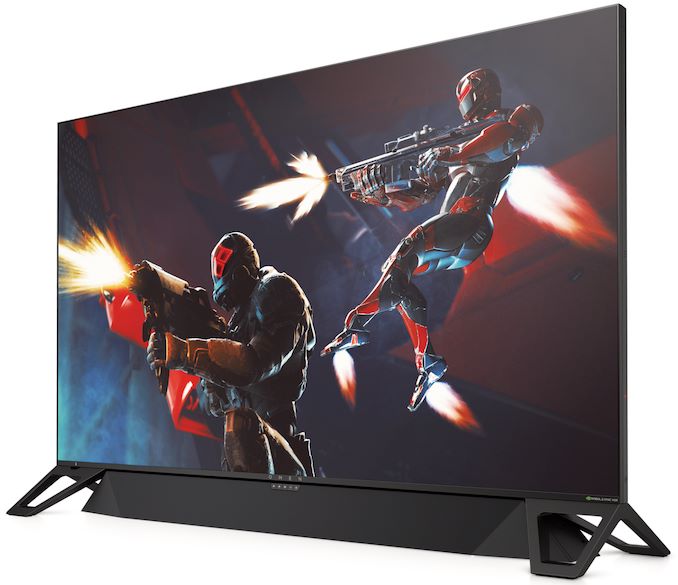