IBM has announced it has signed an agreement with Samsung Foundry to produce its next-generation processors. This includes processors for IBM Power Systems, IBM z, and LinuxONE systems, all using Samsung’s 7 nm fabrication process that uses extreme ultraviolet lithography (EUVL). The decision comes as no surprise as GlobalFoundries, IBM’s manufacturing partner for CPUs, decided to abandon development of 7 nm and more advanced technologies. IBM and Globalfroundies manufacturing agreement, whereby fabs, IP, and $$ were given to GlobalFoundries to make IBM's CPUs, ends this month.

IBM and Samsung have collaborated for 15 years researching and developing various semiconductor production materials and technologies as part of IBM’s Research Alliance. Considering the fact that Samsung’s and GlobalFoundries’ fabrication processes rely on R&D conducted internally and as part of IBM’s Research Alliance, IBM developers know what to expect from these technologies. IBM said that under the current agreement, the two companies will expand and extend the strategic partnership, but did not elaborate whether this means development of a custom version of Samsung’s 7LPP manufacturing process for IBM. At present, the companies call the tech to be used for IBM’s chips as “7 nm EUV”.

IBM has traditionally used custom manufacturing processes to build its IBM POWER processors for servers and IBM z CPUs for mission-critical mainframes. IBM’s chips combine a high core count and complexity with very high frequencies, which is why the company required highly-custom process technologies that relied on SOI wafers, featured an increased amount of metal layers, a reduced transistor density, and other adjustments. Typically, technologies fine-tuned for IBM CPUs by IBM Microelectronics and then GlobalFoundries were only used for these products (partly because of IP and partly because of costs). 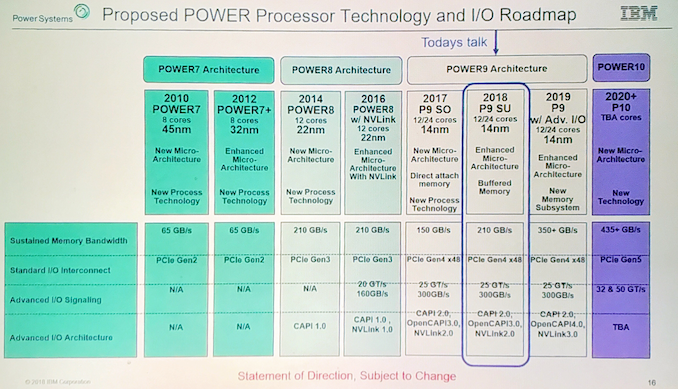 The two companies also did not disclose what exactly Samsung Foundry will produce for IBM. Based on IBM’s current roadmap for POWER processors, its 2019 CPUs will be made by GlobalFoundries using a custom 14 nm fabrication process. Meanwhile, the company’s next-gen POWER10 products set to hit the market in 2020 or later will allegedly use a different manufacturing tech. Meanwhile, IBM’s next-gen z15 processors for IBM Z mainframes, which are not introduced on a per-annum cadence, will most likely be fabbed by Samsung. 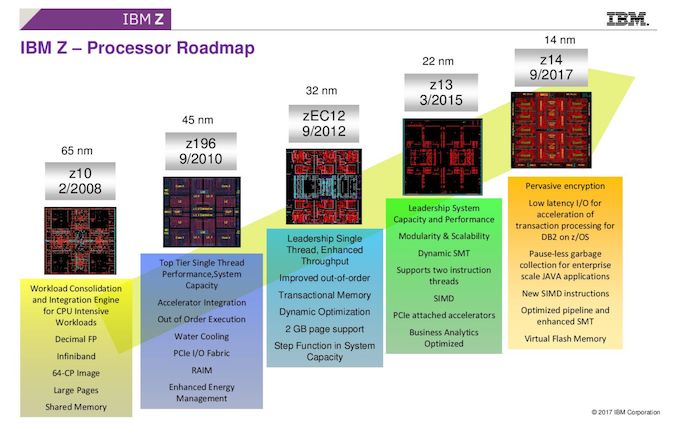 Samsung Foundry recently started to use its 7LPP manufacturing tech for high-volume production of undisclosed chips. This fabrication process uses EUVL tools for select layers only in a bid to reduce cycle times.