While the GIGABYTE BIOS across the AM4 range of motherboards is basic in appearance, the simple to use and easy to navigate menus make it one of the most user-friendly, without all of the glamour and flash of some other vendors UEFI offerings. The majority of the BIOS features white text on a black background with deep orange graphical surrounds. With the chosen option being selected via keyboard arrow keys or with a mouse, the selection is highlighted in yellow making it easy to see. 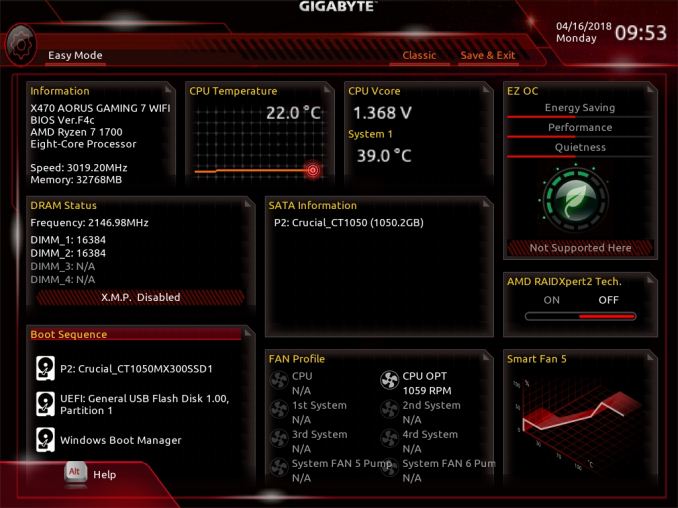 The GIGABYTE UEFI BIOS used on the X470 Aorus Gaming 7 Wi-Fi features two different modes, an easy mode which is targeted at novice users looking to make minor changes, whilst still giving access to key information such as system information. This includes vital information such as the defined boot sequence of installed storage devices, memory and CPU clock frequency speeds and even temperature and CPU core voltage. 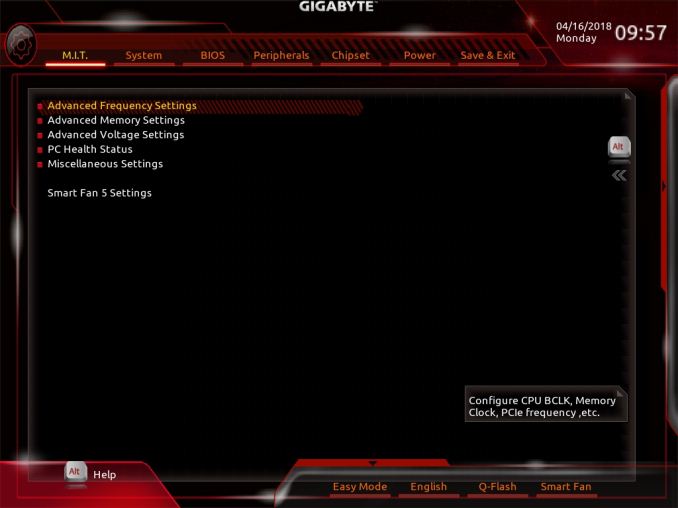 Pressing F2 with a single key press will alternate between the Easy Mode and the more advanced section of the BIOS. The main sub-menus such as M.I.T (motherboard intelligent tweaker), System and power go from left to right across the top of the GUI panel. The rest of the subsections within each submenu is arranged in a top to bottom order. Pressing the ALT key once brings up a small panel on the right-hand side which gives relative information based on which particular menu or selection is highlighted. 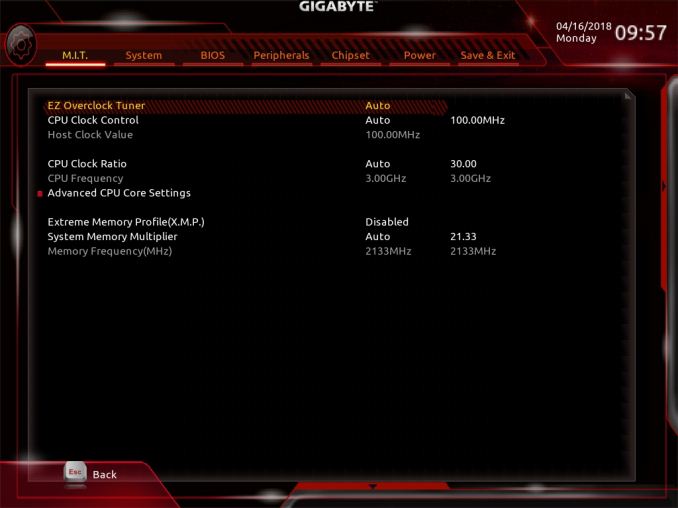 The M.I.T section is where the key overclocking options are found such as voltage control, frequency and memory setting selection. Having everything for overclocking in one particular section makes it easier for a user to find the relevant options they are looking for as opposed to having to constantly jump between sub menus after altering the settings of each component. 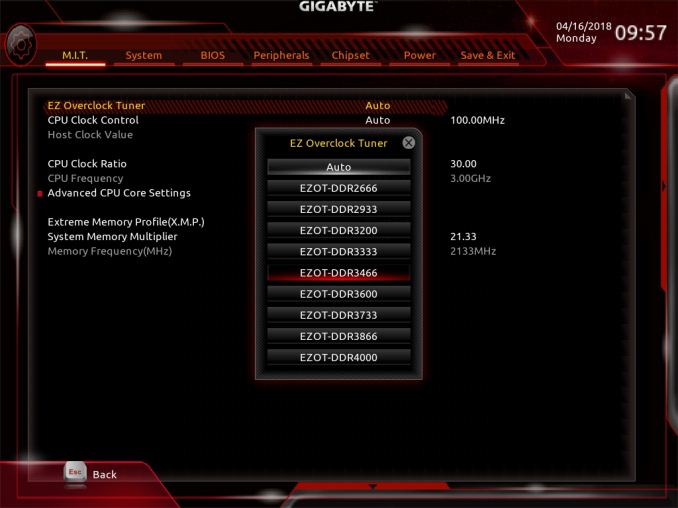 While the GIGABYTE X470 Gaming 7 Wi-Fi has an option called EZ Overclock Tuner, this doesn’t actually affect CPU core frequency like other vendors one-click overclocking functions. Instead, it’s aimed at DRAM with each option offering a different memory strap such as DDR4-3200, DDR4-3333, with the maximum option offering blistering speeds of DDR4-4000 despite official support on the X470 Gaming 7 Wi-Fi being listed as DDR4-3600. 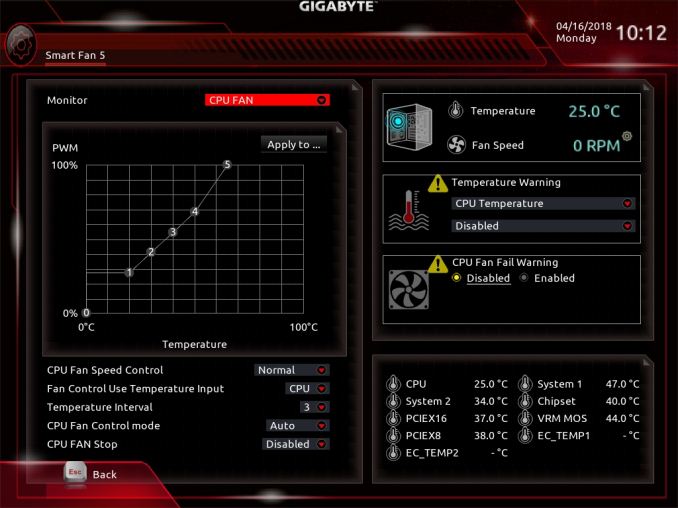 Motherboard vendors now opt towards using 4-pin PWM enabled fan headers as the standard which still works with DC only supported fans without issues, just without the advantage of software control. The BIOS’s of recent times feature their own custom fan control utilities integrated within the BIOS, GIGABYTE call theirs Smart Fan 5. Custom fan profiles can be set depending on the fan installed such as the CPU fan and system headers. This also includes the ability to set a custom fan curve profile-based temperature points against the amount of PWM applied.

The GIGABYTE UEFI BIOS is very simple to navigate and remained responsive throughout use without all the bells and whistles that other vendors include. Whilst GIGABYTE has included Smart Fan 5 within the BIOS, there’s no sign of any board explorer function which would probably be a step too far graphically for the BIOS itself to accommodate; still it’s a sore miss and for a more novice user, it could be useful for seeing what’s installed when troubleshooting potential issues such as DRAM problems including where a potentially defective stick of memory is physically installed but it’s not showing up in the slot. A visual representation as opposed to reading DIMM 1 or DIMM 2 can save a lot of time.

A wide accompaniment of software is included bundled with the X470 Aorus Gaming 7 Wi-Fi with the most notable being the Aorus App Center, Aorus 3D OSD, Aorus BIOS, the Aorus Easy Tune utility, Aorus Game Boost, and Realtek HD Audio Manager software. To use the bulk of the software provided, Aorus App Center must be installed and this acts as a sort of software control hub. 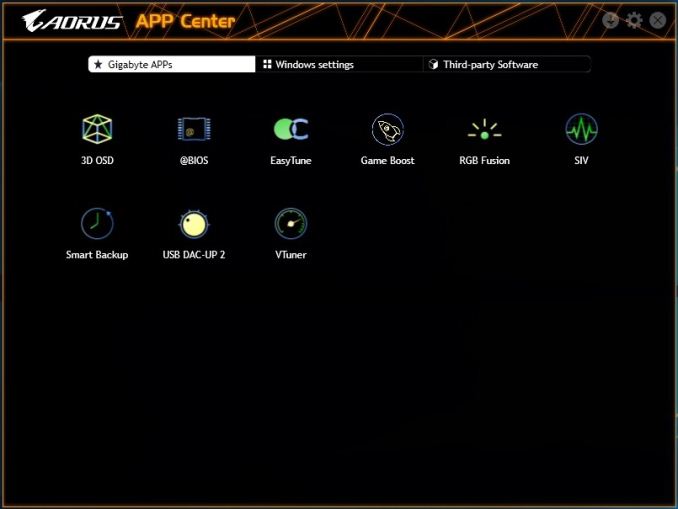 The Aorus App Center not only consolidates all the pre-installed software earmarked for the GIGABYTE X470 Gaming 7 Wi-Fi, but it offers the ability to do the same with installed third-party software. Not only is having everything together simple and convenient, but the Windows settings panel includes a quick jump to things like power options, Windows Firewall, Networking options as well as things like screen resolution. It resembles the Windows Control Panel with a lot of the same options featured, including a quick and easy pathway to the popular/equally unpopular Windows Update.

It’s a little disappointing that most of the software included from GIGABYTE will only work if this is installed, but it’s not entirely intrusive and as previously stated, it’s more convenient as having a single desktop icon instead of several separate ones might annoy some. 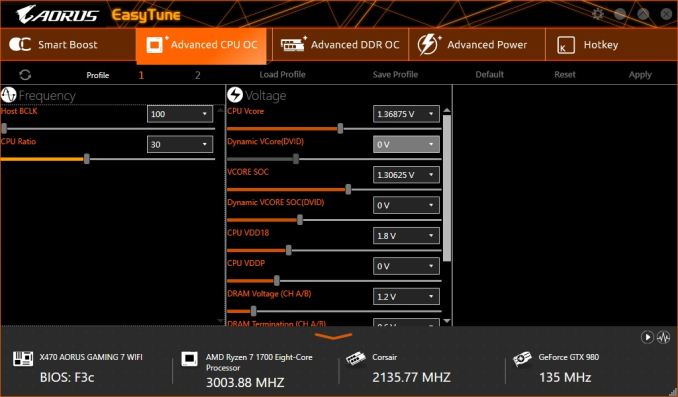 Aorus Easy Tune acts is essentially an overclockers toolkit without the need for entering the BIOS. On offer is a host of customizable settings including memory frequency where an XMP memory profile can be enabled or disabled, CPU frequency and the relative voltage settings and different modes inside the Smart Boost menu which include default, OC, automatic and eco for a more power conscious user. The software itself looks like it’s been rehashed from a previous version as the advanced power menu features no options to select between and the Advanced DDR OC section also offers little in the way of selectable memory altering settings. 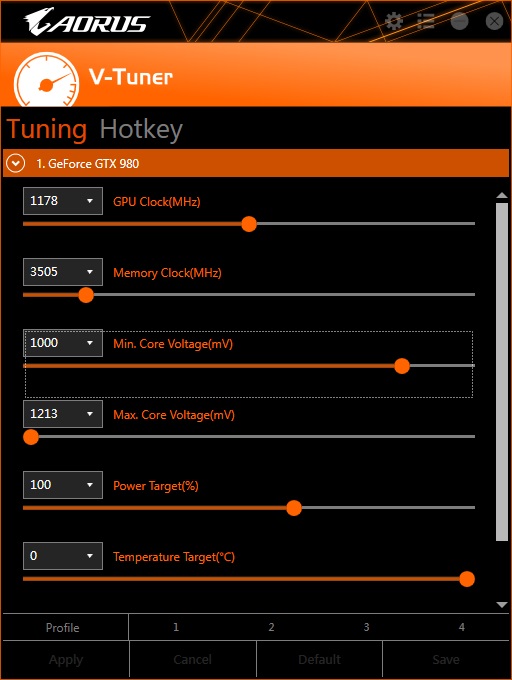 The V-Tuner software is reminiscent of a cut-down version of GIGABYTE’s Xtreme Gaming GPU tweaking utility and offers overclocking options including GPU core clock, VRAM clock speed, and even power/temperature target options. Dependent on the graphics card being used and whether or not voltage is unlocked, options to increase or decrease the min/max core voltage is also featured. 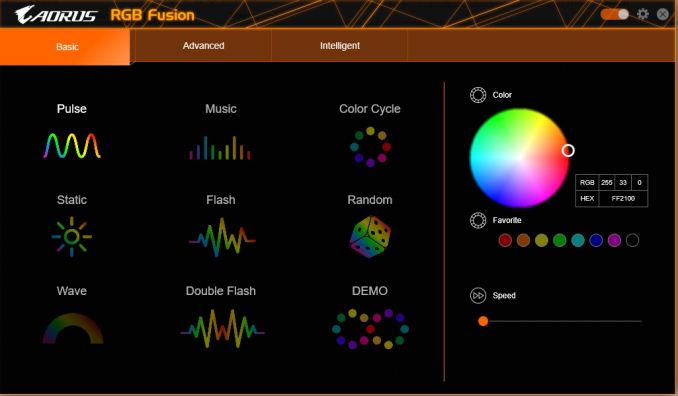 For a user looking to add their own aesthetic touch to the X470 Gaming 7 Wi-Fi, RGB Fusion has a wide variety of coma-inducing lighting effects including pulse, static, flash, random and even double flash. Regardless of whatever disco inspired event desired inside a case, or out if a test bench is more preferred, a full RGB color wheel offers a true RGB spectrum to choose from and within the advanced panel, effects and colors can be set individually to each of the lighting zones, or all can be synced together to create a unified look across the board. This includes the built-in RGB LEDs as well as external LED strips which GIGABYTE include two RGBW LED headers as well as two Digital LED strip headers too. 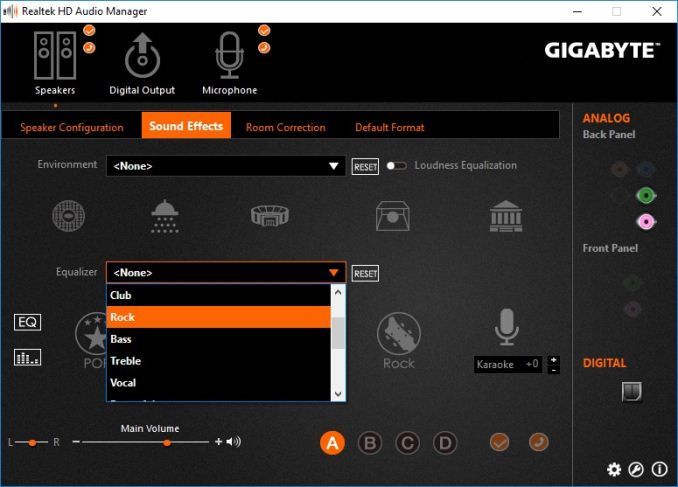 In a rather bold move, GIGABYTE has decided to opt for their own re-skinned version of Realtek’s HD Audio Manager software to aide and assist with the onboard audio. The software itself offers a pretty comprehensive set of customizable options as well as equalizer profiles specific to whatever is being boomed out including rock, bass, vocal and even treble. It’s even possible to set an environmental profile such as underwater as if Metallica we’re submerged plucking out Orion; providing the electrocution didn’t kill them first! Options for changing the bitrate are as expected, present and accounted for. 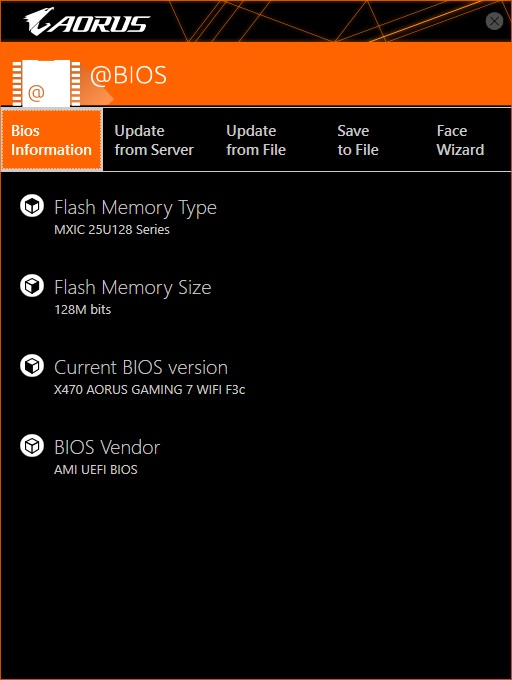 Not everybody feels confident in updating the BIOS on a motherboard and personally, I find it gut-wrenching even though it’s perfectly normal and safe to do. For a user not so confident in navigating the BIOS, the Aorus @BIOS software enables users to easily update the BIOS in a very easy manner within Windows. While preference always goes to updating the BIOS through the actual BIOS itself due to the Windows operating system is known to crash from time to time, a corrupted BIOS is an unusable one. The BIOS within the software can be updated via a specific and compatible file which has been pre-downloaded, or it can be left up to the latest version uploaded to GIGABYTE’s cloud server. Preference would be to pre-download from the relevant product page.