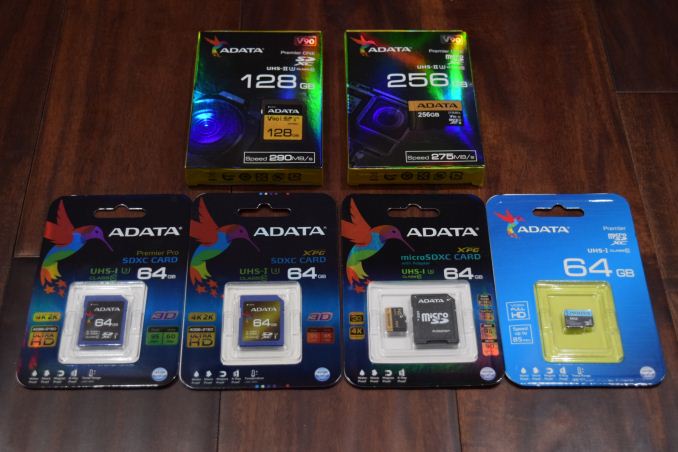 SD (Secure Digital) cards were introduced in 1999, as an update to the existing MultiMediaCards (MMCs). It gained traction even in areas where CompactFlash had been preferred, thanks to its small size. Its popularity is evident by the fact that it has spawned two follow-ups in the same form factor - starting with the SDSC in 1999 for capacities between 1MB and 2GB, we got SD High Capacity (SDHC) in 2006 (up to 32GB) and SD eXtended Capacity (SDXC) in 2009 (up to 2TB). The cards also come in various sizes - standard, mini, and micro. Currently, the standard and micro sizes are more popular in the market. SD's popularity and affordability has meant that almost all consumer cameras come with a SD card slot.

ADATA is a popular vendor in the memory market with their DRAM and SSD lineup. Their expertise with flash obviously places them in a good position to target the memory card market. In particular, they have a large number of SD and microSD cards targeting various performance levels. They sent across 6 different cards (three in SD and three in microSD form factors):

Each of these six cards were subject to our comprehensive memory card evaluation routine, and five of them emerged unscathed.

The next two sections will details the obtained performance numbers. Prior to that, we take a look at the testbed setup and evaluation methodology.

Evaluation of memory cards is done on Windows with the testbed outlined in the table below. The USB 3.1 Type-C port enabled by the Intel Alpine Ridge controller. It connects to the Z170 PCH via a PCIe 3.0 x4 link. is used for benchmarking purposes on the testbed side. SD cards utilize the Lexar Professional Workflow SR2 SDHC / SDXC UHS-II USB 3.0 Reader. The reader was placed in the Lexar Professional Workflow HR2 hub and uplinked through its USB 3.0 port with the help of a USB 3.0 Type-A female to Type-C male cable.

The full details of the reasoning behind choosing the above build components can be found here.