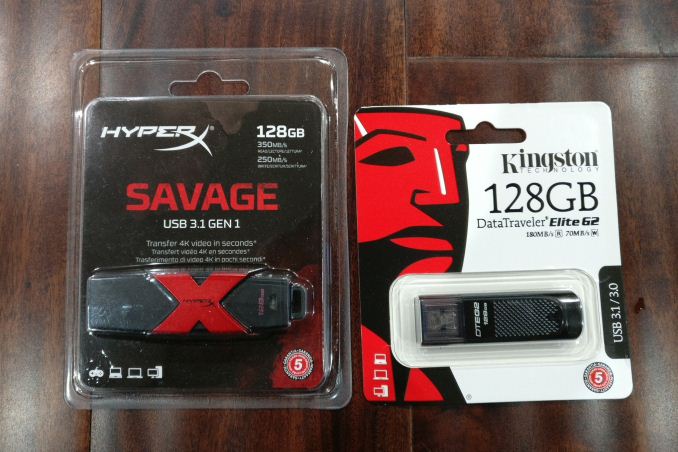 Thumb drives are the most commonly used flash-based storage devices, thanks to their compact form factor and affordability. In our series of direct-attached storage reviews, we have taken a look at drives that use flash controllers that bridge USB directly to the flash as well as those that use USB - SATA bridges. Compact thumb drives usually use a native controller (i.e, directly translating the flash interface to USB without an intermediate SATA link). Today, we will be looking at two Kingston thumb drives that fall into this category - the Kingston DataTraveler Elite G2 and the Kingston HyperX Savage 128GB USB flash drives.

The Kingston DataTraveler Elite G2 is a compact thumb drive (60mm x 19mm x 11mm) with a metal case. It is shock- and water-resistant. The transparent cap is removable, and the drive uses a USB 3.1 Gen 1 Type-A male interface. The HyperX Savage, on the other hand, targets the gamers with its unique industrial design. It also has a removable non-transparent cap and a USB 3.1 Gen 1 Type-A male interface. However, it is slightly bulkier (76mm x 23mm x 12mm). While the HyperX Savage is available in capacities up to 512GB, the DataTraveler Elite G2 tops out at 128GB.

Instead of disassembling the thumb drive to get the internal details, we took a look at the ChipGenius report for the two drives (reproduced below). The DataTraveler Elite G2 uses the Phison PS2307 controller (FW v05.04.10) with Toshiba MLC flash. The HyperX Savage also uses Toshiba MLC flash, but, with the Phison PS2308 (FW v05.07.10) controller. The main difference is that the HyperX Savage is a dual-channel design, while the PS2307 in the DataTraveler Elite G2 supports one channel only.

Evaluation of DAS units on Windows is done with the testbed outlined in the table below. For devices with a USB 3.0 (via an attached Type-A male interface) connections (such as the Kingston HyperX Savage 128GB that we are considering today), we utilize the USB 3.1 Type-C port enabled by the Intel Alpine Ridge controller. It connects to the Z170 PCH via a PCIe 3.0 x4 link. A Type-C male to Type-A female cable is also used to connect the thumb drives to the motherboard's Type-C port.

Kingston claims R/W speeds of 180/70 MBps for the DataTraveler Elite G2, and 350/250 MBps for the HyperX Savage 128GB USB flash drives. These are backed up by the ATTO benchmarks provided below. Unfortunately, these access traces are not very common in real-life scenarios.

CrystalDiskMark, despite being a canned benchmark, provides a better estimate of the performance range with a selected set of numbers. As evident from the screenshot below, the performance can dip very low for 4K random accesses. In fact, the dual-channel design performs worse than the single-channel one for the 4K access traces.

Our testing methodology for DAS units also takes into consideration the usual use-case for such devices. The most common usage scenario is transfer of large amounts of photos and videos to and from the unit. The minor usage scenario is importing files directly off the DAS into a multimedia editing program such as Adobe Photoshop. 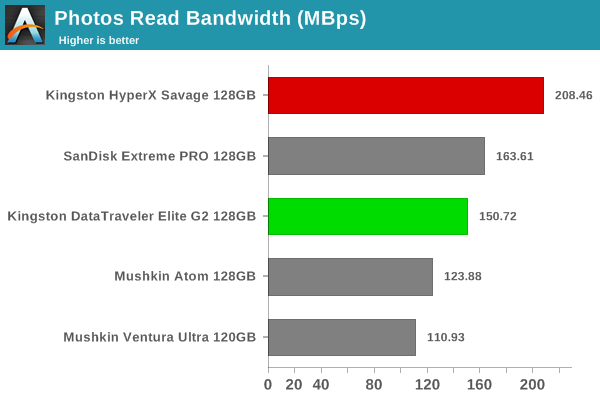 We find that the HyperX Savage comes out on top for all the read workloads. However, the SanDisk Extreme PRO 128GB fares better in the write workloads. The DataTraveler Elite G2 is held back by its single channel design.

In this case, the Mushkin Ventura Ultra with its SSD controller and SATA - USB bridge leads by a huge margin, as expected. Write workloads are particularly brutal on these native controller designs. 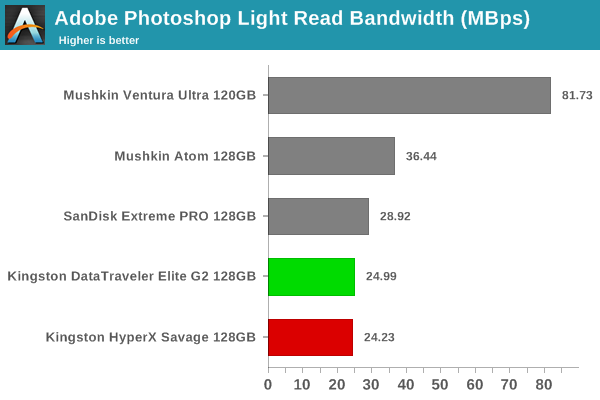 An important point to note here is that each of the first three blue and green areas correspond to 15.6 GB of writes and reads respectively. Throttling, if any, is apparent within the processing of the photos suite itself.

Neither thumb drive supports temperature read-outs. The bandwidth behavior does not show any signs of throttling uner load. The raw numbers are low enough to avoid any thermal issues resulting from controller overheating.

Support for TRIM is an oft-requested feature in flash drives. It is important to maintain long-term performance consistency. Kingston makes no claims about TRIM support for the thumb drives being tested today. We set out to check it ourselves. CyberShadow's trimcheck is a quick tool to get the status of TRIM support. However, it presents a couple of challenges: it sometimes returns INDETERMINATE after processing, and, in case TRIM comes back as NOT WORKING or not kicked in yet, it is not clear whether the blame lies with the OS / file system or the storage controller / bridge chip or the SSD itself. In order to get a clear idea, our TRIM check routine adopts the following strategy:

Conclusions can be made based on the results from the last two steps.

Unfortunately, we find that neither thumb drive supports TRIM.

Both thumb drives are robust performers as far as their target market is concerned. Moving on to the pricing aspect, we find the lowest price for the HyperX Savage to be $79, while the DataTraveler Elite G2 is slightly lower at $72. 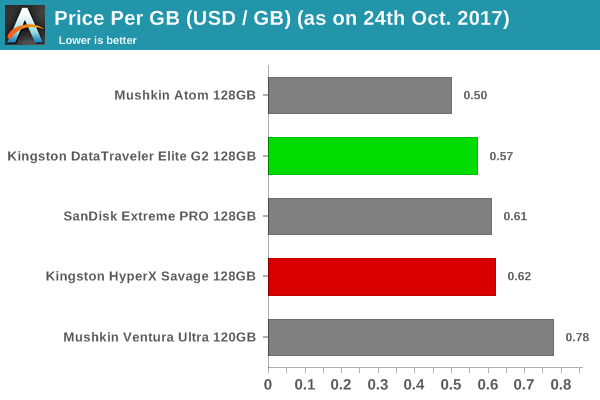 The recent imbalance in supply and demand for flash has resulted in increased prices for thumb drives across the board. Even TLC-based thumb drives like the Mushkin Atom 128GB are selling at 50c/GB. Therefore, the Elite G2's 57c/GB and HyperX Savage's 62c/GB appear reasonable.