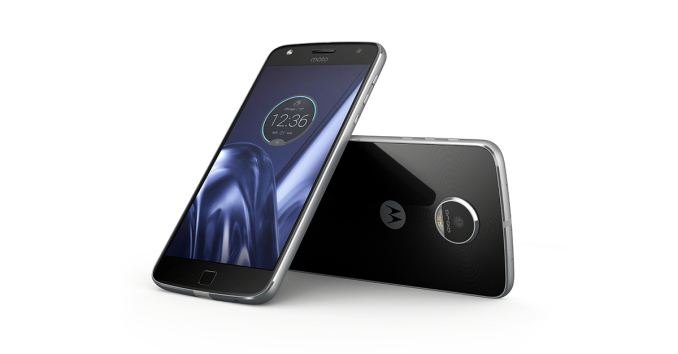 Motorola’s modular Moto Z family gets a new member today. The Moto Z Play Droid costs less than the Moto Z Droid and Moto Z Force Droid, both of which went on sale just over one month ago, and while it maintains full compatibility with Motorola’s Moto Mods and retains the same design language, there are some interesting hardware differences.

The Moto Z Play Droid still uses a 5.5-inch Samsung AMOLED display like its brothers, but resolution drops to 1920x1080. Because of the PenTile subpixel layout, the effective pixel density is less than a 1080p LCD of the same size. For this reason, we prefer a 1440p (QHD) resolution for phablet-sized displays to mitigate the loss in sharpness and color artifacts caused by PenTile’s diamond layout. To my aged eyes, the difference between the Moto Z Play Droid’s 1080p display and the Moto Z Droid’s 1440p display is small but noticeable.

Fortunately, the Moto Z Play comes with two user-selectable color modes: a “Standard” mode calibrated for the sRGB color space and a “Vibrant” mode that takes advantage of the AMOLED panel’s wider color gamut to display more vivid colors. While we have not tested the Moto Z Play, the other two Moto Zs performed pretty well in our display performance tests apart from a cool white point that reduced grayscale accuracy.

There are differences inside the Moto Z Play too. Most significantly is a switch from Qualcomm’s Snapdragon 820 SoC to the Snapdragon 625, which includes eight ARM Cortex-A53 CPU cores running at up to 2.0GHz and a slimmed down Adreno 506 GPU that supports the latest OpenGL ES 3.1 and Vulkan graphics APIs. The SoC is paired with 3GB of LPDDR3 RAM that should provide sufficient bandwidth for this SoC and enough room for efficient multitasking with the Moto Z Play’s near-stock Android OS.

The Qualcomm X9 modem that comes integrated within the Snapdragon 625 SoC supports 2x20 MHz carrier aggregation on both the downlink and uplink, providing up to 300 Mb/s and 150 Mb/s, respectively. Other connectivity options include Bluetooth 4.0 LE, NFC, and Wi-Fi, although the latter option receives a downgrade relative to the other Moto Zs. Instead of 802.11ac and 2x2 MIMO, the Moto Z Play only supports 802.11n over 2.4GHz and 5GHz bands. 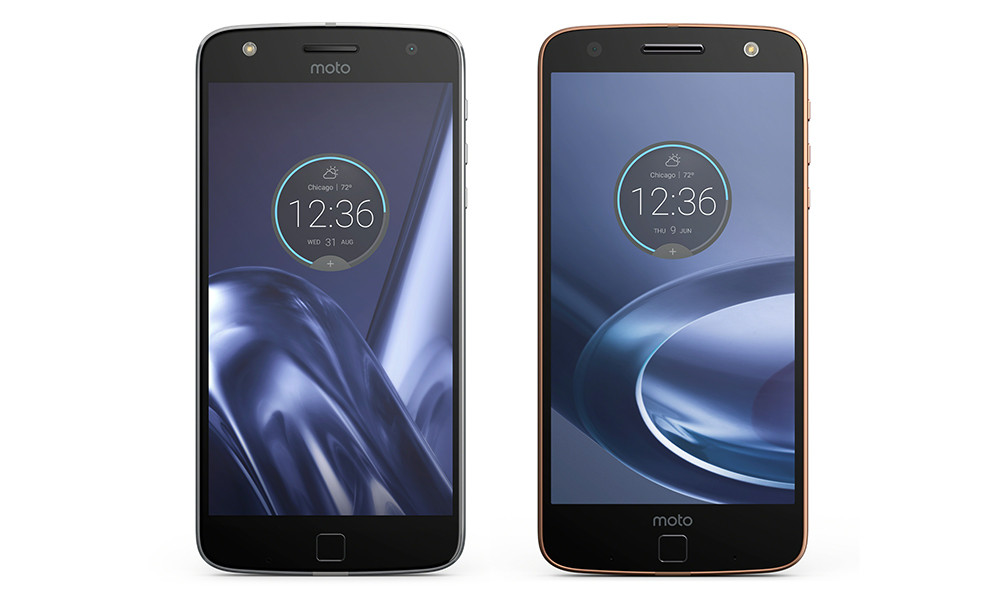 The Moto Z Play also packs in a 3510 mAh battery, basically the same size as the Moto Z Force, that when combined with the relatively low-power A53 CPU cores in the Snapdragon 625—manufactured on Samsung’s 14nm LPP FinFET process—should result in good battery life. It also includes Motorola’s TurboPower rapid charging technology and ships with the same 15W charger with permanently attached cord as the Moto Z Droid.

All three Moto Zs use the same 5MP front-facing camera with automatic HDR imaging and a dedicated LED flash. The rear cameras are all different, however. The Moto Z Play’s rear camera looks like an upgrade over the standard Moto Z’s and is very similar to the Moto Z Force’s camera, at least on paper. The 16MP OmniVision PureCel Plus-S sensor includes a buried color filter array and deep trench isolation (DTI) technology to reduce electrical crosstalk and improve color fidelity. The stacked die uses larger 1.3µm pixels that improve full-well capacity too. It uses the same hybrid autofocus system as the Moto Z Force that combines laser AF, phase detect AF (PDAF), and standard contrast AF to improve focusing speed and accuracy over a broad range of lighting conditions. The Moto Z Play does give up OIS, however, and its f/2.0 aperture has 13% less area than the Moto Z Force, but 31% more area than the Moto Z. 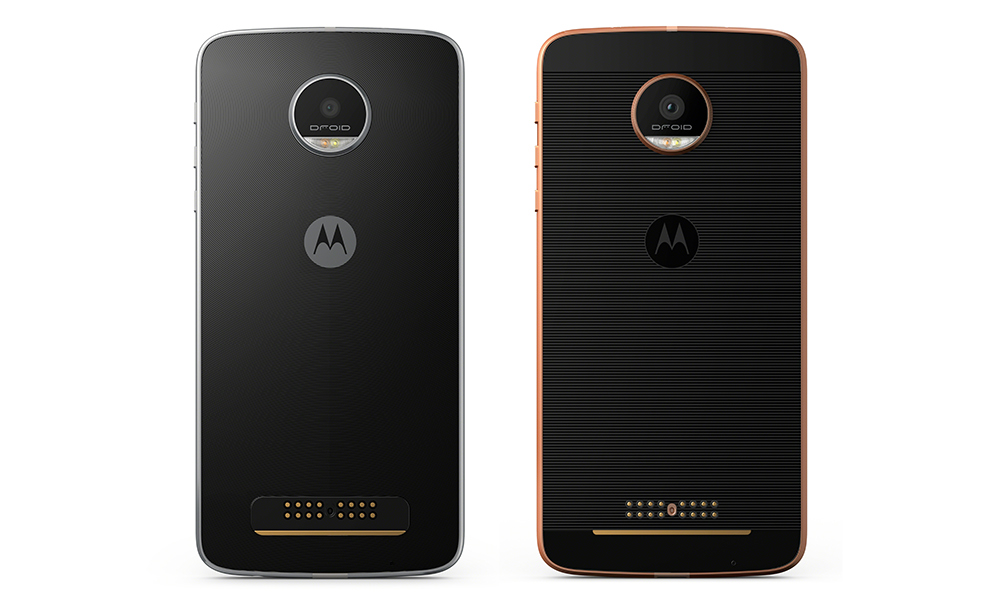 The Moto Z Play looks very similar to the other two Moto Zs with a few minor differences. It has the same thickness and nearly the same dimensions as the Moto Z Force, but its smooth metal sides, which lack the Force’s double taper, make it just a little more difficult to pick up from a table. A combination NanoSIM and microSD card tray and one of three microphones are located on the top edge, while a USB Type-C port is centered on the bottom edge. There’s also a 3.5mm headphone jack on the bottom, an analog port the other Moto Zs lack.

The back of the phone is still flat with a proprietary connector near the bottom to accommodate Motorola’s Moto Mod accessories. The same raised, circular camera module is also present, but the back appears to be made entirely out of plastic now, which really is no big deal. It also has a more prominent Motorola logo and a subtle circular pattern centered around the camera module instead of the horizontal lines like the other Moto Zs. Despite Motorola’s attempt to dress it up, the phone really looks naked without something attached to the back. Fortunately, a Charcoal Ash wood Style Shell is included in the box.

There’s a few changes on the front too. Up top the Moto Z Play uses a different earpiece/speaker that’s less prone to collecting crud, and the front-facing camera and LED flash switch sides. The first two Moto Zs have large, ugly lower bezels, a byproduct of using a square fingerprint sensor and placing the display circuitry below the screen. For the Moto Z Play, Motorola moves the display circuitry up top, allowing for a more reasonably sized lower bezel. This does mean that the upper bezel is now larger, although this does not negatively affect one-handed use like the previous model’s larger lower bezel.

In addition to authenticating purchases and signing into apps, the fingerprint sensor also instantly wakes and unlocks the phone, or turns off the display and locks the phone, after enrolling one or more fingers, a nice convenience feature that’s similar to double-tapping the screen to wake or lock the phone. One thing it does not do, however, is function as a home button, which takes a little getting used to. Instead of physical navigation buttons, the Moto Zs use onscreen controls. 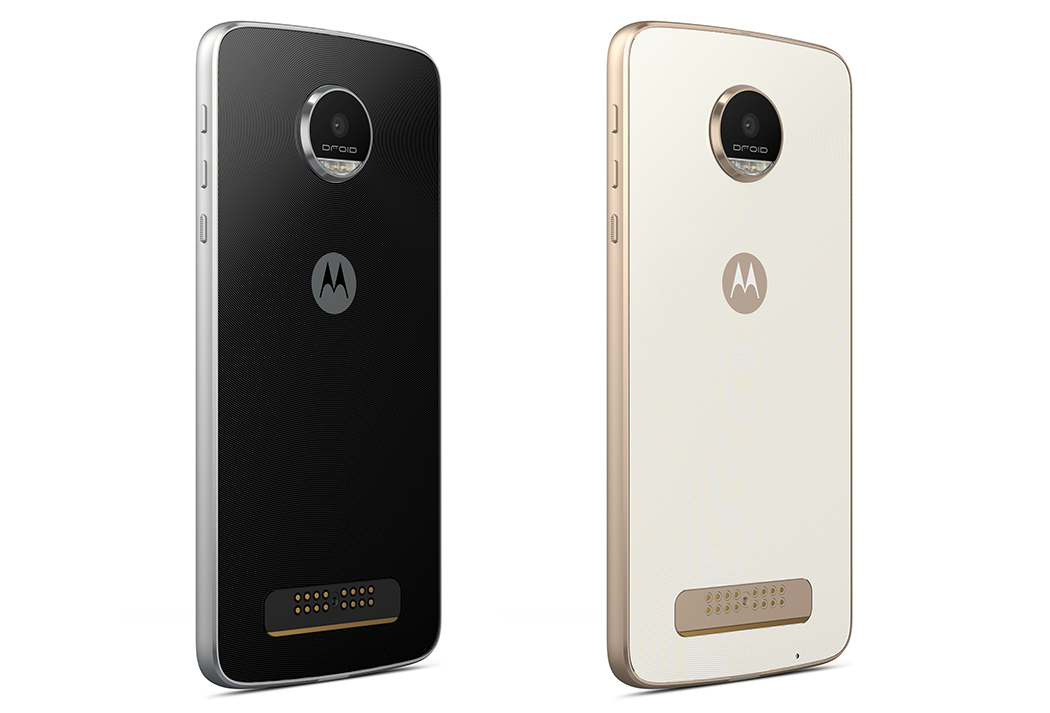 Like the Moto Z and Moto Z Force, the Moto Z Play will initially be a Verizon exclusive. The Moto Z Play Droid Edition will be available for sale on September 8 online at motorola.com or in Verizon stores for $408 or $17 per month for 24 months using the Verizon device payment plan. Color choices include silver with black front and back or gold with white front and “Sugar White” back.