The Cooler Master V1200 Platinum sports an aesthetically pleasing yet not extravagant design. Experienced eyes will recognize the ODM of this unit by its external appearance alone, even though it is not exactly the same as the original design. Parallel line engravings and the model logo decorate the sides of the black chassis, applied so that they will appear properly from a windowed side panel, regardless if the unit has been installed with the fan facing upwards or downwards. The typical fan guard has been replaced with a grey plate forming a honeycomb mesh and with the company badge over the fan motor. Cooler Master placed the sticker with the electrical specifications of the unit at the top side of the chassis. 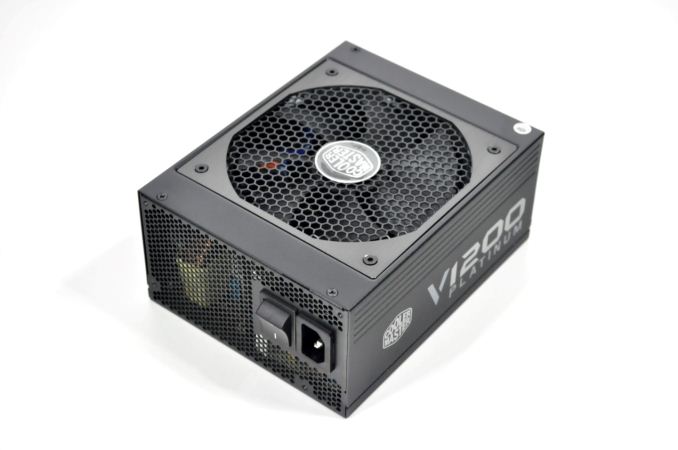 The rear side of the chassis is as usual relatively uninteresting, with a typical C14 receptacle next to an oversized switch. The front side however is littered with the numerous connectors for the modular cables. The PCI Express and CPU connectors are in line across the edge of the unit, but the connectors are keyed and there is no risk of inserting a cable into the wrong connector. There also is a small connector for the hybrid fan switch, which goes to the bracket that can occupy an expansion slot of the case.

Cooler Master installed a high speed 135mm fan from Protechnic Electric inside the V1200 Platinum. It is a high quality fan with a dual ball bearing engine and a maximum speed of 2300RPM. The company reports a maximum airflow of 115.8CFM, which is close to the airflow that our instrumentation displayed, as we measured it at 109.4CFM. 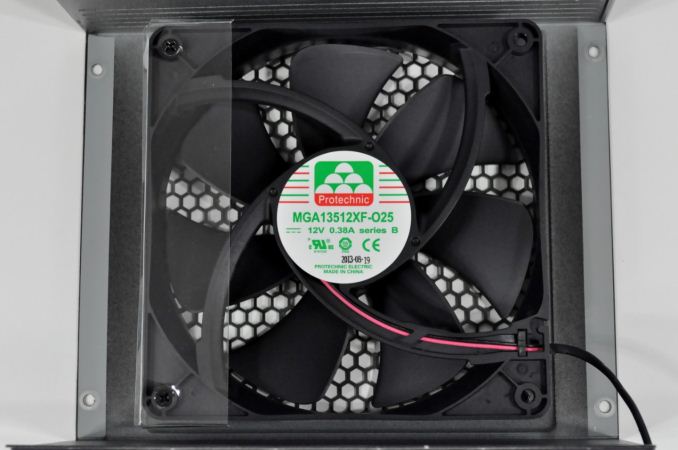 If the external design of the Cooler Master V1200 Platinum was not enough of a hint regarding the OEM behind it, the removal of its cover instantly reveals that this is a Seasonic XP3 platform, the same platform Seasonic used to create the Platinum SS-1200XP3. Cooler Master did not perform any notable changes on the design of the unit, with the exception of the Active PFC capacitors. There are two 330μF capacitors and one 390μF capacitor supplied by Hitachi in the V1200 Platinum, where Seasonic had three 390μF capacitors from Nippon Chemi-Con installed. All of the secondary capacitors however, electrolytic and solid-state alike, are still supplied by Nippon Chemi-Con. 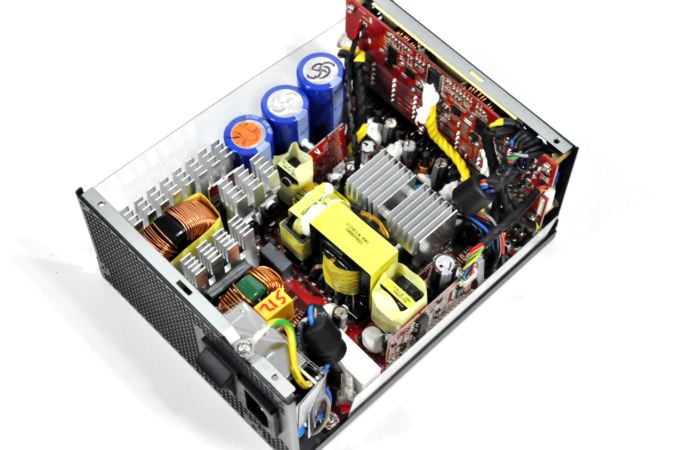 The filtering stage begins on a shielded PCB attached to the back of the AC receptacle and continues on the main PCB. There are six Y capacitors, four X capacitors, and three filtering inductors inside the V1200 Platinum, forming a very strong AC filtering stage. It has two primary rectifying bridges attached on a sizable heatsink, right before the large APFC inductor.

The active components of the PFC stage, one diode and three FETs, are attached to the larger heatsink near the edge of the PCB. The smaller heatsink near the center of the unit cools the four transistors that form a full-bridge primary inversion stage. Two square heatsinks cool the active components of the secondary conversion stage, which are not directly attached to the heatsinks but are on the rear of the main PCB instead.

As the Cooler Master V1200 Platinum is manufactured by Seasonic, it shares the exceptional design and soldering quality as the SS-1200XP3 as well. Cooler Master also kept the very high quality passive and active components. However, the V1200 Platinum also shares the messy assembly job that we encountered in our review of the SS-1200XP3­­­. It is not a bad assembly job, but it is not up to the standards that Seasonic has us used to. There are cables pressing against components and many electrolytic capacitors appear to have received mechanical force after they have been soldered on the board, tilting them left and right, while the glue appears to have been spilt carelessly and purposelessly, as there are spots where it does not even touch the components it is supposed to.