Earlier today Samsung unveiled its Galaxy S III, at the heart of which is Samsung's new Exynos 4 Quad SoC. Fortunately we got a ton of hands on time with the device at Samsung's unpacked event in London and are able to bring you a full performance preview of the new flagship, due to be shipping in Europe on May 29th.

The Exynos 4 Quad is an obvious evolution of the dual-core Exynos in many of the Galaxy S II devices. Built on Samsung's 32nm high-k + metal gate LP process, the new Exynos integrates four ARM Cortex A9s running at up to 1.4GHz (200MHz minimum clock). Each core can be power gated individually to prevent the extra cores from being a power burden in normal usage. Each core also operates on its own voltage and frequency plane, taking a page from Qualcomm's philosophies on clocking. There is no fifth companion core, but the assumption is  Samsung's 32nm HK+MG LP process should have good enough leakage characteristics to reduce the need for such a design.

The GPU is still ARM's Mali-400/MP4, however we're not sure of its clocks. Similar to the dual-core Exynos, there's a dual-channel LPDDR2 memory controller that feeds the entire SoC. The combination should result in performance competitive with NVIDIA's Tegra 3 (and a bit higher in memory bandwidth limited scenarios), but potentially at lower power levels thanks to Samsung's 32nm process.

While we won't know much about the power side of things until we get a review device in hand, we can look at its performance today.

As always, we start with our Javascript performance tests that measure a combination of the hardware's performance in addition to the software on the device itself. Sunspider performance is extremely good: 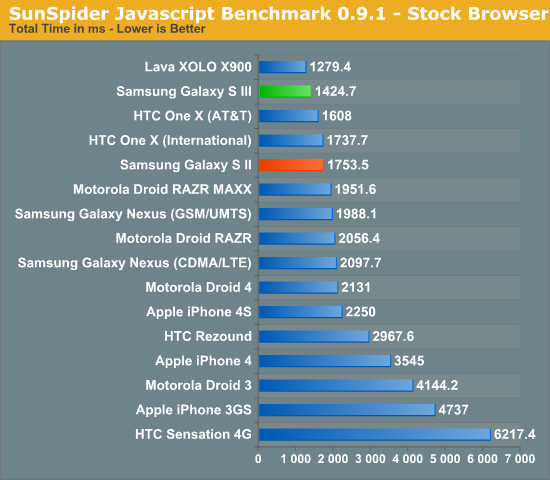 While we thought we hit a performance wall around 1800ms, the One X from HTC, the Lava XOLO and now the Samsung Galaxy S III have reset the barrier for us. In this case the performance boost is likely more due to software than hardware, but the combination of the two results in performance that's better than almost anything we've seen thus far. The obvious exception being Intel's Medfield in the X900.

BrowserMark is another solid js benchmark, but here we're really able to see just how much tuning Samsung has done in its browser: 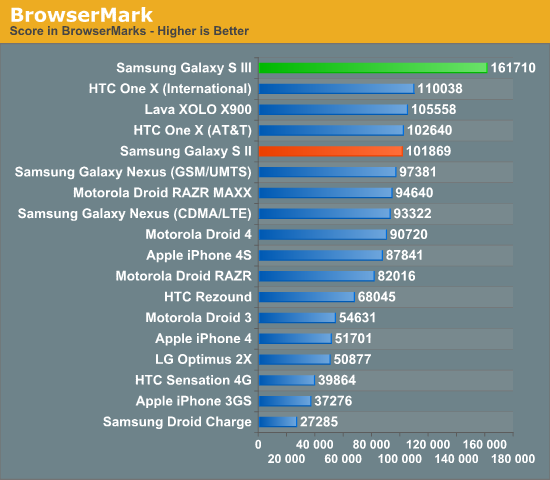 The Galaxy S III is significantly faster than anything else we've ever tested thus far. The browsing experience in general is very good on the SGS3, and the advantage here likely has more to do with Samsung's browser code and the fact that it's running Android 4.0.4 rather than any inherent SoC advantage. We know how 1.4GHz Cortex A9s should perform, and this is clearly much better than that.

Once again we turn to Qualcomm's Vellamo to get an idea for browser and UI scrolling performance: 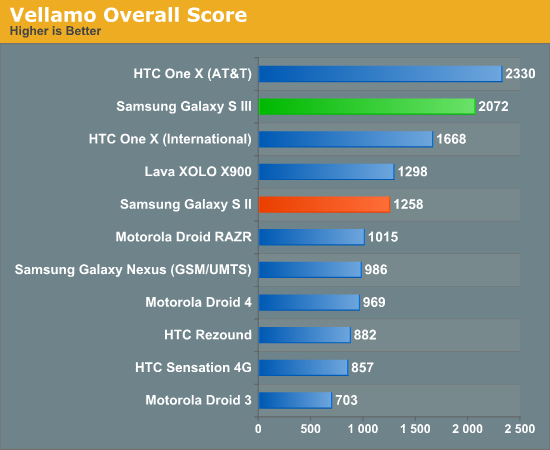 Although (understandably) not as quick as the Snapdragon S4 based One X, the SGS3 does extremely well here - likely due in no small part to whatever browser optimizations ship in Samsung's 4.0.4 build. As Brian put it when he first got time with the device: it's butter.

While we don't know the clocks of the Mali-400/MP4 GPU in the SGS3, it's obviously significantly quicker than its predecessor. Similar to what we saw when the Galaxy S II launched, Samsung once again takes the crown for fastest smartphone GPU in our performance tests.

The onscreen GLBenchmark Egypt and Pro results are understandably v-sync limited, but if you look at how much headroom is available thanks to the faster GPU it's clear that the Galaxy S III should be able to handle newer, more complex games, better than its predecessor.

What's particularly insane is that Samsung is able to deliver better performance than the iPhone 4S, the previous king-of-the-GPU-hill in these tests. 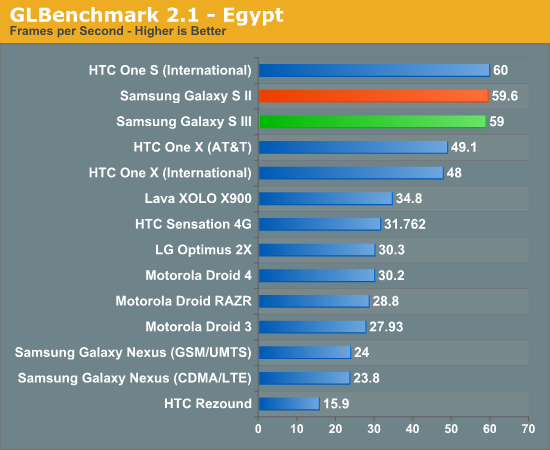 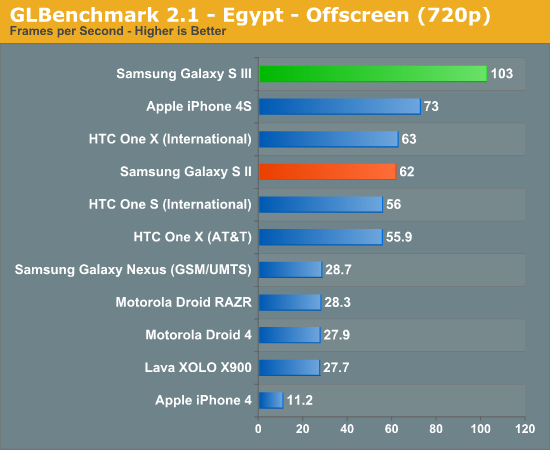 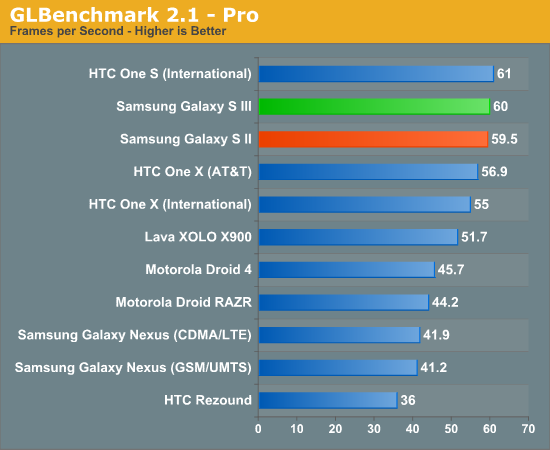 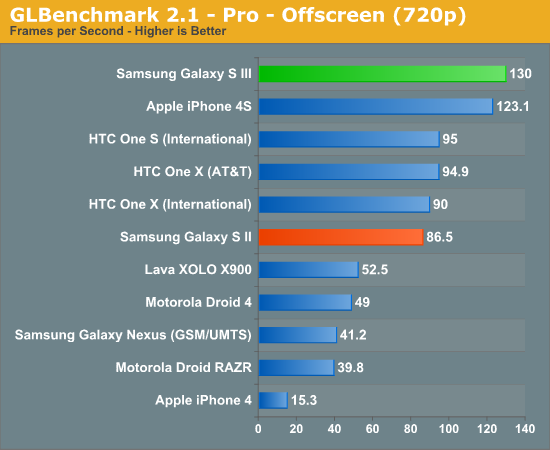 The performance advantage isn't anywhere near as staggering if we look as BaseMark ES 2.0, however as we've mentioned before this benchmark is definitely showing its age at this point. Despite the aggressive tuning Qualcomm has done for these benchmarks, Samsung is actually able to remain competitive and even pull out a slight win in the Taiji test. Both benchmarks are v-sync limited on the fastest platforms however. 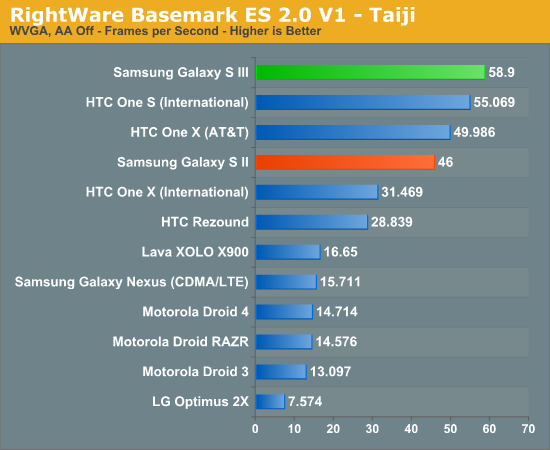 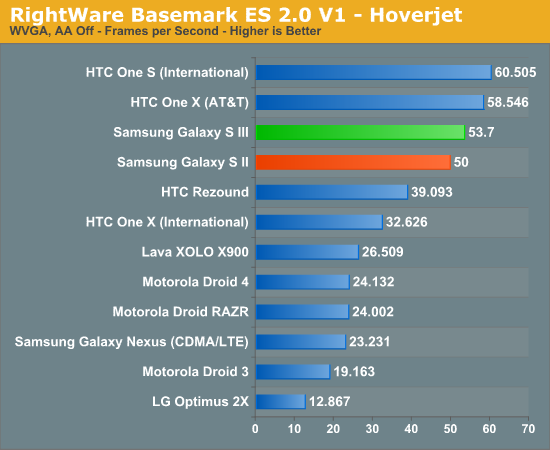 Our first interactions with Samsung's Exynos 4 Quad are promising, but there's still much more to understand. Samsung clearly used 32nm as a means to higher GPU clock speeds, which in turn gives us much better GPU performance. The big unknown, as always, is power consumption. Based on what we've seen thus far from Samsung's 32nm LP process in Apple's iPad 2,4 (review forthcoming), Exynos 4 Quad should be a pretty good step forward in the power department as well.

As soon as we can get our hands on final hardware you can expect a full review of the Galaxy S III, including power and battery life analysis.

Initial reactions to the Galaxy S III announcement seemed almost disappointing, however stay tuned for our hands on impressions of the device as well as even more depth/detail on the hardware platform - you may be surprised.