The new Corsair K95 RGB Platinum is clearly based on the same aesthetic design as the rest of the K×× keyboards series, but is not physically identical to any of the previous K95 or K70 versions. It appears to be more of a hybrid between the two, designed to please the users who were complaining about the lack of macro keys on any K70 keyboard and found the K95 keyboards to be excessively large. 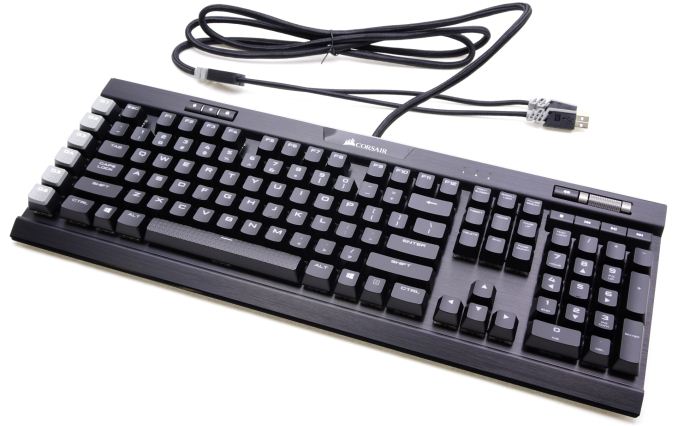 The Corsair K95 RGB Platinum features an anodized brushed aluminum chassis, with the keys secured directly on its surface rather than being embedded into it. Its “floating” design makes it very simple to clean, as a simple blow would remove most debris from the aluminum surface of the keyboard. The Corsair logo at the top of the keyboard is now part of a glossy plastic frame that is backlit.

The Corsair K95 RGB Platinum is a standard 104-key keyboard expanded with a six extra keys to the left. It does not fully adhere to the ANSI layout, as the bottom row of the keyboard has a 6.5× Spacebar, two 1.25× ALT, two 1.5× CTRL and three 1× WIN/Menu bottom row keys. The standard ANSI layout has a 6.25× Spacebar and seven 1.25× bottom row keys. This is the “gaming” layout that reduces the size of the unnecessary WIN/Menu keys in favor of the more useful CTRL/Spacebar keys. Corsair has been using this layout on all of their advanced keyboards. The keycaps are made from ABS plastic and have large, futuristic characters, while the Space Bar key is textured.

The extra six keys to the left of the main keyboard are grey, textured and contoured, much like the extra ten keycaps that Corsair supplies for gaming. As we will see in the following pages, these and any other keys of the Corsair K95 RGB Platinum can be programmed to execute virtually everything from simple keystrokes to advanced macros.

Four plastic media control buttons can be seen above the keypad, right below the silver volume control wheel. A short, wide button next to the volume control wheel is by default the volume mute button. Three similar buttons can be seen towards the left side of the keyboard as well. The first one can be used to rotate between programmed profiles, the second adjusts the backlight brightness and the third is the “gaming mode” that by default locks the WIN keys. 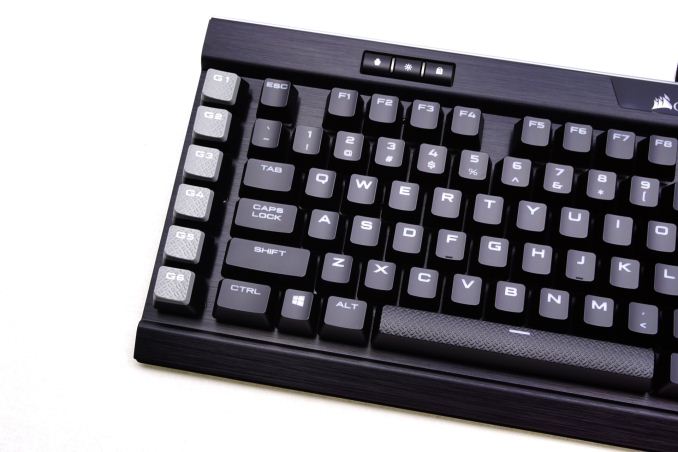 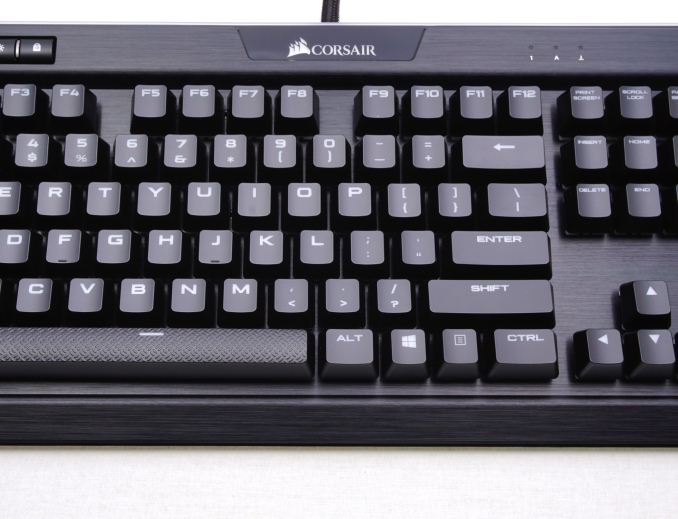 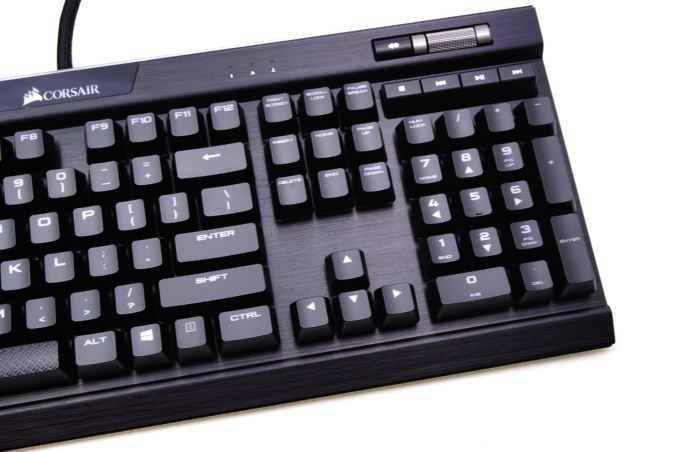 Beneath the keycaps we found the Cherry MX RGB Speed switches. The default MX Speed switch is a modified version of the classic MX Red switch, with its travel distance reduced by 0.8 mm. This offers faster actuation (1.2 mm to the actuation point instead of 2 mm) but also shortens the full travel distance of the key as well. However, things are not technically quite as simple as that. The actuation force remains the same (45 gram-force) while the distance is shortened by nearly 50%. While the travel of the key remains linear, the force per mm of travel increases at a much higher rate. As a result, the MX Speed switch feels significantly stiffer and stronger to the user, especially after the actuation point, and also resets faster than the classic MX Red switch. There is a version of the K95 RGB Platinum coming out with tactile Cherry MX RGB Brown switches as well. 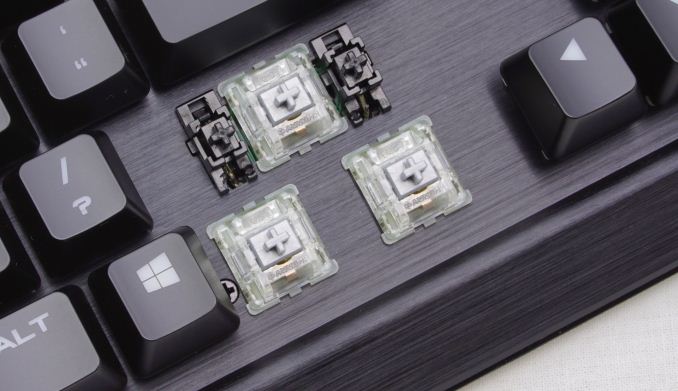 The bottom of the K95 RGB Platinum is entirely unlike any other that we have seen from Corsair to this date. There are four very large anti-skid pads, firmly securing the keyboard into place on any surface. As a matter of fact, the grip of the pads is so strong that the tilt feet are being forced to retract if one tries to push the keyboard sideways while it is sitting on a desk. Two cable channels can be seen forming a large X. The designer’s idea must have been gaming headsets, as this design allows the headset cable to be cleanly routed underneath the keyboard.

On the inside, the K95 RGB Platinum is similar to the K70 RGB, but is using an upgraded and significantly more complex layout. The heart of the keyboard is a NXP LPC11U68JBD100 microprocessor, an ARM Cortex-M0+ based chipset with a CPU frequency of 50 MHz, 256 kB Flash memory, 4 kB EEPROM and 36 kB SRAM. Corsair most likely selected this particular chip not because of its processing power but because of its impressive internal flash memory. An extra SPANSION FL164K 8MB memory chip can be found nearby, which is being used to store the onboard programmed profiles. 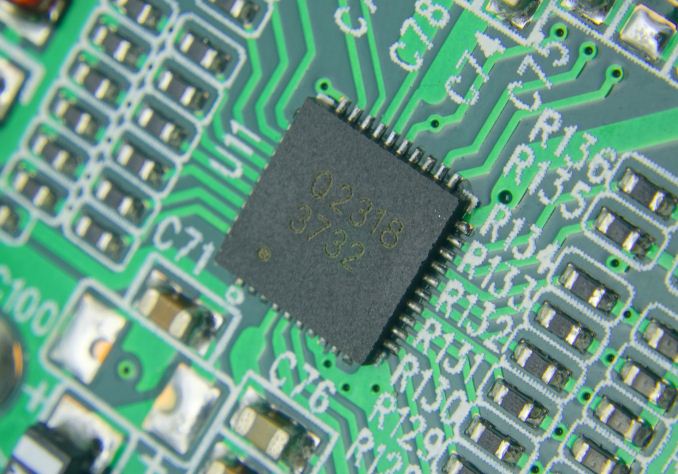 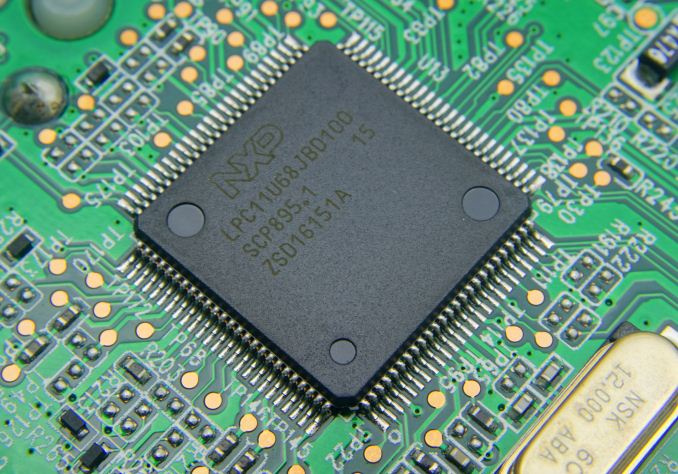 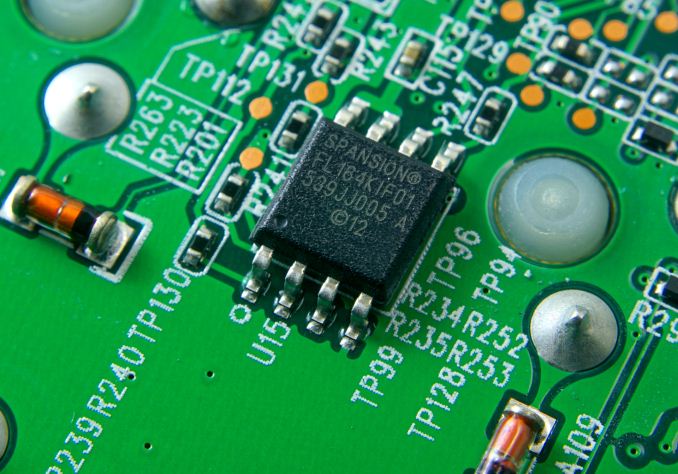